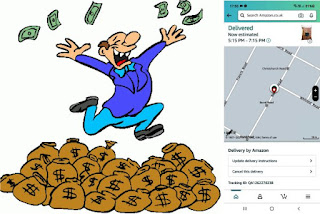 My phone’s alarm woke me by telling me “Get your arse out of its pit” (as is does). So I got my arse out of its pit, came down and (taking care not to wake Sid) made brekkie. This morning the Sky-Q box found “Hardy Bucks” so I watched the first episode, It was OK. As I watched so Sid was barking in his sleep. I wish he wouldn’t do that, but rather that than turds.

Having done a COVID test (negative) I peered into the Internet. It was fairly quiet this morning. No one was arguing on Facebook for once. Mind you there was no space for arguments – my page was packed out with adverts for Conservative politicians. The Tories have certainly spent a fortune on their campaign. Oh well… there are some wards locally where only the Conservatives stand for election. Partly because they know they will get in round here anyway, and partly because no one else can be bothered. I know I certainly can’t.

I had one hundred and eighty emails telling me that geocaches I’d hidden had been found yesterday (and no “did not find” messages!). And I had an email telling me the vet insurance were going to pay for pretty much all of Fudge’s final vet bill. They weren’t going to pay for the top-of-the-range casket though. I suppose that was fair enough, but I’ve recouped a thousand pounds that I thought I would never see again.

Mind you I’d rather have my little dog back, but there it is.

I had a minor victory when I got to my car this morning. On Saturday evening a bird (slightly larger than a jumbo jet) had done a crap the size of a dustbin lid on the windscreen. Having planned to wash it off yesterday I forgot all about it. Fortunately the torrential rain overnight had washed it all away.

As I drove to work the pundits on the radio were talking all sorts of drivel, as they do. Bill Gates is getting a divorce. He was described as the fourth richest person in the world with a personal fortune of a hundred and thirty billion dollars. I wonder how much of that he will give up in the divorce settlement. Even one thousandth of one per cent of his bank balance is far more money that I will ever earn in a lifetime. Who would ever miss one thousandth of one per cent of what they've got? I'll sent him an email and ask if he might give me a bung.

There was also talk about how the cost of legally changing your gender has been radically slashed. You can now change whatever you are for less than a tenner.  In years gone by I would be rather sarcastic about whether someone was male, female or hatstand; these days I just look on in frank amazement. There are (apparently) over fifty different sorts of gender and quite honestly I have no idea what any of that is all about.

I got to work and did my thing on a rather iron deficient sort of day (you can tell because of the hypochromia and the pencil cells), but being on the early shift meant I got to go home early. I collected Pogo and Treacle and drove them down to Orlestone Woods where we had a rather good walk. Rather good in that we went round the wood and the only other people we saw were about a hundred yards away and walking in the other direction.

Once home I fed the fish, then saw my phone was telling me that my Amazon delivery was only one stop away. There was even a map showing the van was outside my house. I popped outside and met the chap just before he rang the doorbell.

I solved a few more geo-puzzles, then er indoors TM” sorted a rather good bit of dinner which we scoffed whilst watching the second episode of “Intergalactic”. I was all for giving up on the show, but er indoors TM” says to give it another chance… It might perk up…