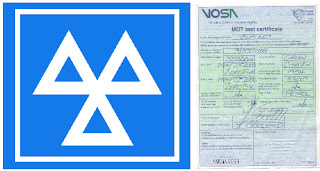 I have often heard it said that God laughs when we make plans. Yesterday I was speculating on treating myself to something expensive on the money saved from not paying council tax for a couple of months. Today I have spent that money.

The ‘er indoors TM – mobile went for its MOT and service today. By some strange co-incidence the bill was almost exactly the same as the amount of bonus money I was expecting to have from two month free from council tax.

Perhaps I won’t be getting that new PC or camera after all.

Talking of cars, the “My Boy TM - mobile” is up for its MOT in a fortnight, and it’s no secret that hopes aren’t high. I’ve mentioned before about how quiet (!) he can be, and I’m sure we all overheard last night’s bellowed telephone conversation in which he was considering cutting his losses, not bothering with the MOT and taking the thing directly to the scrap yard. He’s now talking about his next car. I’m hearing the phrase “Land Rover” more and more. Almost as much as I’m hearing the phrase “can’t afford”.

I suppose the blog won’t be complete unless I mention the third car in the family fleet. My car is still rather full with display boards. I’ve spoken with the nice lady at Woodchurch Village Hall who says that if I can find a suitable space, we can store the boards there. I’m sure I can find somewhere…