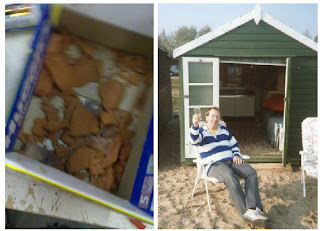 I have obtained a photograph of the fragments of the clay head mentioned in yesterday’s blog. The thing does look somewhat beyond repair. Who’d be an art student?

It has been suggested that yesterday’s photo was taken in Ramsgate. “My Boy TM ” was about that size when we had a family day out to Ramsgate. I remember the day vividly; he used to get travel sick, and on the way home from Ramsgate he absolutely filled his grandfather’s new car with wall-to-wall vomiting. At the time his digestive system was akin to Doctor Who’s tardis – he could (and often did) generate several times his own body volume in vom. Happy days.

I don’t remember his auntie being along on that day though, and it was from her that I got the photo. Another of her photos from the late eighties has come to light. Me on the beach at . The photo features my famous blue & white rugby shirt; a garment which (over twenty years later) is still perfectly serviceable, and which still comes out on holidays and high days. If any of my loyal readers have photos of me in that shirt, please email them to me – I feel a Facebook album coming up.

Meanwhile back on the ranch, it’s been just another day. Half the night wide awake, half the day falling asleep. Some things never change. I slipped out of work early to go to the dentist. As he was rooting about inside my cake hole, the dentist was reminiscing about the horrific wisdom tooth extraction I’d had a month or so ago. Having regaled his dental nurse with the tale of how traumatic the extraction was, he then turned to me and asked if I remembered the episode. Funnily enough, I did recall something about having a wisdom tooth out. I wonder how many people find that such a trivial event slips their mind.

Then I checked my emails. Over five hundred spam, including sixty four purporting to be from HM revenue & customs. I suppose enough people must fall for these scams to make it worth the crooks’ while to send them out.

And the guinea pigs would seem to be scrapping. “Daddies Little Angel TM ” has identified one as being the bullying, troublemaking guinea pig. However her theory fell at the first hurdle when I noticed that the alleged protagonist had a lump bitten out of its chuff. I’ve consulted the source of all knowledge, and the Internet says that guinea pigs do this. If we give them separate food bowls and separate places to hide, then chances are they will stop scrapping. Apparently the family’s guinea pigs are at the teenage stage.

We’ve been there before…