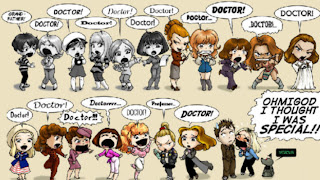 Yesterday we forgot to set the Sky Plus box to record the second part of the Doctor Who Xmas special. Forgetting to do so probably speaks volumes about what I thought of the first part. I watched the second part on the BBC’s website this morning. It was…. well…

During the week I had a conversation about last week’s episode with a good friend of mine. Well, to be precise, a good friend’s daughter (aged six.) She loved the program because it was scary and had this baddie who was a man who could fly and that turned into a skeleton whenever he wanted to eat someone.

Which is fine. She loved it. I didn’t. The trouble with Doctor Who is that having watched it all my life I tend to forget that it is primarily a children’s program. Things like continuity, plausibility, plot, etc do not feature in kids TV shows. Take the most recent Doctor Who two-part story. Having brought the Master back from the smouldering remains of a cremated corpse, and spent two episodes fighting him, what actually happened to him in the end? I’m not going to spoil it for anyone, because I don’t know what actually happened to him in the end. He just wasn’t there any more. The writers just forgot he was there.

I find myself comparing Doctor Who with other sci-fi such as “Survivors”, “BattleStar Galactica”, “ Five” and even “Star Trek”, and I’m afraid it doesn’t come close.

Consider last week’s TV adaptation of a favourite book of mine - “Day of the Triffids”. If you haven’t seen it, it’s still available on the BBC’s website. The book is based on two rather nonsensical premises. Firstly that most of humanity has gone blind and secondly that the world is filled with twelve foot tall walking carnivorous plants. Both of these notions were presented in such a way that you could believe them, and so you can relate to the tale.

In Doctor Who, with plot holes big enough to drive a bus through, a triffid would just start eating blind people, and the target audience would never question why everyone was blind, or where the triffids came from.

Perhaps this is why I like the “Royle Family” so much. Did you see the Xmas special? I can *so* relate to that program because I can relate to the people in it. And (I would contend) this is the reason for the success of reality TV shows, X-Factor and all that ilk. They’ve got real people in them.