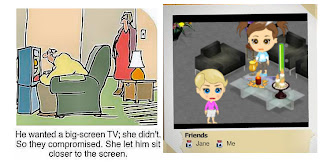 Today was a late start, so I had some time to waste this morning. This new telly is going to take some getting used to. I’ve got accustomed to watching DVDs on my PC screen, and as a special treat on the old telly (when no one else was around). The screen on the new telly is two and a half times the size of the old telly, and over four times the size of my PC screen. I was rather pleased with it as I scoffed jam on toast this morning whilst watching season two of BattleStar Galactica.

I’m still not sure if I can tell the difference between scart-ed telly and HDMI-ed telly, but then again I wonder if anyone really can. And now I’ve put all the cables the right way round, we can record stuff off of the Sky Plus again. Which is a result. DVD recorders aren’t cheap.

Once I’d then mucked about in NeverWinter for a while, I had a look in YoVille. In NeverWinter you get to explore a medieval fantasy environment. You meet elves and gnomes, wizards and bards. You can choose to be a fighter, a paladin, a rogue, a ranger or a druid, a sorcerer or a wizard. There are quests to do, dragons and goblins to slay, and wrongs to right. You get to wield swords and battle axes, you can cast spells, even enchant animals to do your bidding, and you can accrue huge amounts of gold.

YoVille is different. You just randomly wander around town either fighting with people or kissing them. On reflection I suppose YoVille is probably more like real life than NeverWinter. You don’t get to cyber-snog people in NeverWinter.

I then posted off my fifty second letter to HMP Slade. The last one – I hope he gets it before he’s released. Over the last year I’ve sent up a letter every Monday. Or that is every Monday except those Mondays when I was away camping. On those occasions the letter went up on the Tuesday. And I have been really anorak-y and worked out some statistics. My average letter length was 8.8 pages, and I wrote a total of just over 175,000 words. OK, I cheated a bit – I just edited my blog into a letter and added some swear words.

I also sent up thirty five rude word crosswords to the chokey. Each with an average of twenty clues. That’s seven hundred clues. I’m reliably informed he attempted about a dozen clues, but got them all wrong.

It feels odd not writing a crossword this evening.

What with all the stuff I bought over the weekend, I had quite a lot of cardboard boxes cluttering up the house, so I loaded them (and the broken DVD players) into the car and set off for the tip. Even though it’s eighteen months since I got rid of my old Espace, I still seem to think I have it’s luggage storage capacity. Especially when doing tip runs.

The tip was the same as ever – full of people who cannot park, and people who cannot bring themselves to actually put into the skip that which they have just taken to the skip. One particular twit had loaded his car full of tat. Not bags of tat, but loose tat, and was carrying each item one at a time from his car to the skip. I’ve mentioned before that I shouldn’t go to the tip – it just winds me up.

As Sainsburys was then on my way to work I thought I’d get lunch from there. I don’t deny it was a tasty enough lunch. But one which would have been half the price in Tesco. I know where I’m going tomorrow…