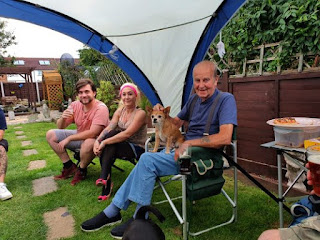 There was a minor bit of excitement this morning as my COVID test came out positive. After a moment’s panic I realised what I thought had been a second pink line was actually a bit of jam on the test card. I did chuckle as I registered yet another negative result.

I sparked up my lap-top and peered into the Internet. The amazingly wanton Liane Francke had disappeared from Facebook overnight (which was probably just as well). I sent out three birthday wishes, then had a look to see what people were arguing about today. I did roll my eyes at one post I saw. Someone with whom I used to work is constantly posting anti-vaccination propaganda despite having only recently been released from a French prison (having been banged up for over a year for selling unlicenced and unproven cancer treatments). This morning she was posting more of the stuff. I think she’s on a hiding to nothing; yesterday the pundits on the radio were saying how die-hard anti-vaxxers in the USA were taking the vaccines having been offered a hundred dollars with each jab.

I took Pogo and Treacle over to the co-op field for a bit of a run. Yesterday they were as good as gold; today we had a little grumbling at other dogs. And with dogs walked I got ready for the day. The event shelter went up, chairs and tables went out… tidying and organising… “Daddy’s Little Angel TM” arrived, and me and her sat and had a drinkie or two until the rest of the family arrived.

We had a good afternoon with all the tribe. Sitting in the garden, eating far too much… The threatened rain which was forecast for three o’clock was no more than a couple of drips, and the rain held off ubtil after six o’clock by which time things were incredibly vague. I took a few photos during the afternoon, if only to remind myself what happened.

Apparently I won thirty quid during the family Zoom bingo session later in the evening… that was a result.