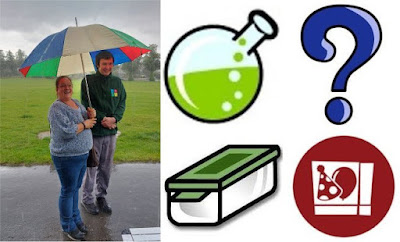 I went to bed (slightly the worse for wear) at nine o’clock last night. “er indoors TM” came to bed a while later, and the thundering of the dogs woke me. I got up feeling like death warmed up and drank a pint of Coca-Cola in the hope that it might act as some sort of a restorative, then went back to bed where I spent the rest of the night plagued by nightmares of having been drafted back into the Scout Association.

There are some people who love being a Scout Leader. I was one for thirteen years. Looking back there were some highlights, but there’s no denying that for much of that time I did it out of a sense of being morally blackmailed; there were never enough leaders, and if I didn’t help out, who would? I suspect the 6th Ashford Scout Group is probably better off these days with leaders who want to be there rather than leaders who feel they have to be there.

I got up at eight o’clock still feeling grim. Far better than I had felt during the night, but grim nonetheless. I set the washing machine loose on some laundry then peered out of the window and sighed. Yesterday evening we’d abandoned chairs and tables in the garden when the rain hit. My plan had been to tidy up this morning, but the rain was still quite heavy as I scoffed toast.

After an hour’s geo-plotting the washing machine was done so I hung wet stuff round the house, woke “er indoors TM” and went to have a look in the garden seeing how the rain had stopped.

I got some tidying done, and then we set off on the day’s adventure. With our usual companions peeling beans (it’s a chutney thing) it was just us today. We went to Hollingbourne for a little stroll. A little while ago a geocaching adventure lab cache series had been set up there, and it was ideal for us for this morning. We wandered round the village looking for points of interest and answering easy questions when we found them. And having found five lab caches we had the co-ordinates for the location of a geo-puzzle. I won’t say where that final was, but I will say that sometimes ordnance survey maps don’t know the difference between roads and footpaths…

With the Hollingbourne adventure done we drove on to Penenden Heath. Back in the day there used to be monthly meet-ups of geocachers, but what with the pandemic they’ve all been on hold for a while. In fact the last meet-up was the one that I staged on 15 February 2020; a year and a half ago. Today saw the geo-meets starting up again. There were a *lot* of friends who were away and on holiday today, but there were quite a few friends along to the meet today. It was good to catch up with them, and to meet new friends too. It was such a shame that the event got cut short by the torrential rain, but (as always) I got a few photos of our walk and our meet.

We came home through the heaviest rain. The rain stopped half-way down the motorway, and we got home to find most of the stuff in the garden had dried out. We got it all away except one table and the event shelter itself which were both still damp. Just as we got the last bit away so the rain we thought we’d left behind caught up with us. In the time it took to run from the garden to the house we got soaked.

We both pootled on-line for a bit as the dogs snored. For all that they like their adventures, they do seem to sleep a lot. As they snored I wrote up a little CPD as the lightning flashed, then dozed in front of the telly as some incredibly dull drivel was broadcast on the Discovery channel. Supposedly talking about the formation of the solar system the programme took an hour to say what could have been said in two minutes.

“er indoors TM” boiled up a very good bit of dinner which we scoffed whilst watching more “House of Games” whilst the tumble drier dried my undercrackers. No matter how bad my life gets, it is never as bad as that of my tumble drier…