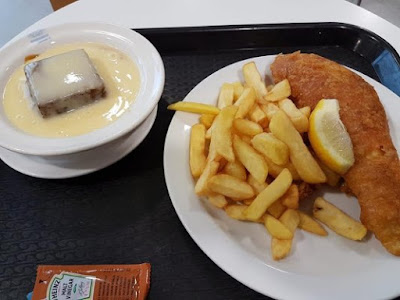 Apparently Treacle was sick on the bed at six o’clock this morning? I slept right through it. I am reliably informed that there was quite a bit of commotion to sleep through. At brekkie time Pogo’s stomach was rumbling impressively. The pair of them have become quite established bin-thieves; there is no telling what they’ve eaten to upset them.

Over my brekkie I saw over forty people had commented on a post on Facebook that a friend made last night. Her dog died recently. She took the body to the vet’s and paid two hundred pounds for a cremation. When she went back for the ashes she was told that somehow or other her dog was cremated along with “another batch of dogs” and the ashes had been lost. She was given her money back and offered the (empty) engraved empty casket as a freebie.
I know I’d go to pieces if that happened to me.
I sent out a couple of birthday messages, saw I’d had no emails overnight, and got dressed.

Despite the rain I took the dogs out. We did our usual circuit of the park without having a single fight with any other dogs. Pogo did get told off by a dog half his size, but I think he deserved that. There was a minor incident in the co-op field though; just as I let the last one off of the lead so a squirrel sprinted past. All three dogs charged off in hot pursuit right underneath the locked gate to the allotments, and then zoomed around the winter vegetables trying to find that elusive tree-rat. I shouted at the dogs to come back, and (would you believe it?) all three came back without needing to be told twice.

We came home and dried off. I popped over the road to get some new batteries. A couple of days ago I said that my new Lego motor wasn’t working. I tried it with new batteries this morning and it still didn’t work. I took the thing apart and had a little look-see, It is working now. I think the trouble is that when I say “new” Lego motor, what I actually mean is “forty-year old second-hand Lego motor that had sat unused in a cupboard for thirty-five years”.
I then ordered some Lego level crossing accessories from eBay and set off in the vague direction of work.

I did have a vague idea of going to the Lego shop at Bluewater before work, but it occurred to me that Smyth's toy shop (only four miles away) might have the thing I wanted. I wanted a couple of largish base plates with streets marked out. The nice man in Smyth's had never heard of them and assured me that there was no such thing. I told him that there was and that I'd bought some a month ago in the Lego shop. "Lego shop?" he asked.
It was a shame I'd not left myself enough time to get to Bluewater before work.

Usually when I am on a late shift I plan myself a little adventure. I had several little adventures in mind for this morning but having seen how bad the weather had been during the dog walk I'd wasted much of my spare time farting around with my Lego motor earlier. I drove a pretty-much straight line to work, diverting only a few hundred yards out of my way (for geo-purposes) at Goudhurst.

I got to work. Usually on arriving at mid-day I have to circle the car park desperately hoping to find a space. Today was different - there must have been a dozen spaces. Just as I parked so the heavens opened. I sat in my car for ten minutes waiting for the rain to pass.

I came in to work and went to the canteen. The works canteen is usually good; today they excelled themselves. Fish and chips followed by sticky toffee pudding and custard. Oh yes.