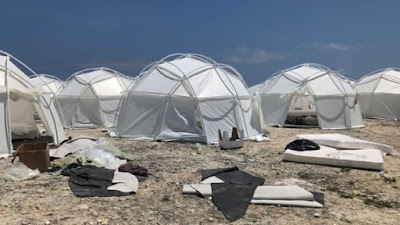 I didn't have a good night; I spent much of it refereeing Treacle who was trying to fight with anyone who was up for it. I eventually nodded off only find that I was sleeping most uncomfortably so as not to disturb Fudge. I couldn't get comfortable without waking him, so I gave up and went downstairs. I found I woke "er indoors TM" who had gone downstairs an hour or so earlier to get away from the commotion that Treacle and Pogo were kicking up. I did find it rather amusing that both Treacle and Pogo had followed her downstairs...
I watched an episode of "Russian Doll" as I scoffed brekkie, and seeing it was still incredibly early I thought I might have time to go hunt out that geocache that went live yesterday morning.

There wasn't that much ice to scrape from my car this morning. As I drove to work the pundits on the radio were talking about how trials are starting in Spain today. Those responsible for the uprising in Catalonia a couple of years ago are having their day in court. Except for the former Catalan leader Carles Puigdemont who is still on the run in Belgium. I say "on the run": he's not doing much running. He's been quite openly going round Europe trying to persuade public opinion to back his cause.
The whole thing is rather odd; co-operation of legal and police systems across Europe is one of the (many) reasons given for remaining in the European Union, and here we are with one European partner refusing to extradite a wanted fugitive to another. What's that all about?

There was a lot of talk about how the Prime Minister is planning to resign in the summer once the current Brexit row has passed. The theory being that if she resigns she can have some say on who takes over whereas if she is ousted she cannot.  Those in the know feel this is her best chance of preventing Boris Johnson getting into Number 10.
There was also talk about how well she is doing in the opinion polls.
Doesn't this speak volumes that despite having made such a monumental balls-up of the most important thing to happen to the UK since the last war, the electorate *still* see her as preferable to Jeremy Corbyn. Either Corbyn is utterly incompetent, or he has upset every journalist in the country. Either way he is certainly not the leader of the opposition that our country needs right now.
​
I eventually got out to the little village of Frant and pulled up. My phone said I was only fifty yards from the Tupperware I sought, and it also said that no one had yet logged a find on it. No find in the first twenty-four hours? That's unheard of. Part of me was expecting to find someone had signed the paper log and was playing silly beggars. Some hunters of Tupperware do that - they find the thing and sign the paper log but don't log the thing on-line until at least one other person has wasted a journey hunting the First to Find. A few caches had gone live in the area last week and the first person to find the things had waited a day before telling the world about it. I wish people wouldn't do that. I'd actually planned out a little bitter diatribe to post on-line if this was the case, but I'd been thinking the worst of my fellow Tupperware-hunters. I was the first one to find the thing this morning. Happy dance. That's now two hundred and forty First to Finds to my credit. Not too shabby at all, really.
As I did the secret geo-rituals I saw that i was being watched from a nearby house. I smiled sweetly at the normal people who were looking at me whilst having their breakfast. I don't think they realised what I was doing, but this cache is on a main road and will make for a quick easy find. I suspect a lot of people will be stopping off. I wonder if those normal people will go have a look-see to find out what the attraction just outside their garden is.

I got to work, hid as best I could, and came home again. "er indoors TM" boiled up  rather good bit of scran, and as we watched it we watched the Netflix documentary about the Fyre festival. I though the thing was a spoof. It actually happened ?