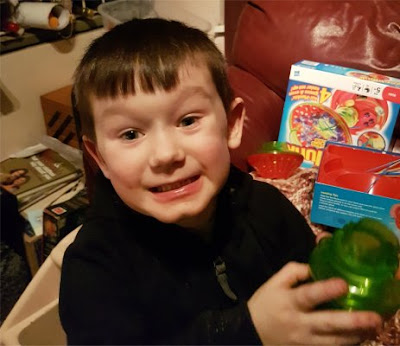 I had a terrible night. Yesterday "er indoors TM" hung some new curtains. Billed as "blackout curtains" they would supposedly help me sleep during the day time when on night shifts by making the room dark.  I can achieve the same by pulling the covers over my head. These curtains made the bedroom too dark last night; I kept waking because the dogs couldn’t see in the dark and were falling over everyone and everything.
Either the curtains will go, or they will be partly pulled open in future.

I gave up trying to sleep shortly after five o'clock, and over brekkie watched the first half of the first episode of "The Umbrella Academy" - a new thing on Netflix. It started OK, but with episodes being an hour long I'm probably going to give up on it if episodes don't have a suitable break point half way through.
I then thanked the world for all the kind messages I'd had about my birthday yesterday via Facebook - over a hundred people had wished me well.

As I walked to my car my piss boiled somewhat. The bin men had put a recycling bin on the road in between all of the parked cars. There were two of these bins hemming my car in; I pulled them both on to the pavement. The bin men round our way send out someone to move the bins before the lorry comes round. They put the bins to obstruct the traffic before the collection, and after the collection they leave the bins strewn along the pavements so that no one can get past. I've seen mothers pushing push-chairs down the road as the pavements are left impassable.
I realise the bin men have a difficult and thankless task, but they do themselves no favours.

I drove to the petrol station where my payment card was declined. Odd. The same card got money from the cashpoint machine five minutes later. I wonder what that was all about?

I set off to work up a very foggy motorway. As I drove there was consternation being expressed by all and sundry because the Irish government had announced its plans for a no-deal Brexit. I would have thought that making plans was a sensible thing (something the UK government might consider); but it seems that quite a few UK politicians have taken offence at this.
There was also talk of a privately funded mission to the Moon blasting off today. The Chinese have plans for a Moon base. Apparently Donald Trump is insisting that the Americans go back to the Moon pretty soon. He'd better get a move on or he will be left behind.

I got to work for the early shift and did my bit. It was a rather busy day, but an early start made for an early finish. I came home and it was light enough to walk the dogs round the park.
Sometimes our walks go well. Sometimes they don’t. This evening’s walk was utter misery. When Pogo wasn’t fighting with other dogs, all three were trying to eat other dogs’ turds.

The evening was rather fraught. "Stormageddon - Bringer of Destruction TM" has come to stay. On the plus side he seemed quite taken with the Lego set-up. But he refused to eat his tea, and he has fed the Ker-Plunk marbles to Treacle.
I *think* "er indoors TM" has retrieved most of them, but I shell keep a weather eye on that dog’s turds for a day or so…