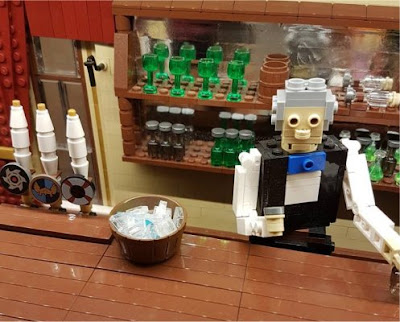 As I scoffed toast I opened my birthday cards and pressies. Some very good cards – many were rather appropriate. People had clearly thought about what card to get me. and I had a rather decent haul of pressies too.

We took the dogs round the park; compared to yesterday, today was rather uneventful, and with walk walked and dogs settled we drove over to Canterbury. We were hoping we’d be able to get into the “Bricks Britannia” exhibition. We were told that there “might” be tickets available; we found no queue at all and were soon in the exhibition.
It was billed as “A History of Britain in LEGO Bricks”. In retrospect I don’t know what I was expecting, but I think it fair to say that I had been expecting more. What they had was good, but I was expecting to see more than a dozen rather small dioramas and one train. We spent about half an hour there, but (in all honesty) I’d seen it all in ten minutes.
As the exhibition was in the Beaney museum we thought we’d look at the Oliver Postgate section. Oliver Postgate was the chap behind “The Clangers” and “Bagpuss” and when he died a lot of the props and puppets from the TV shows had been left to the museum. I’d heard an awful lot about it over the years; I was expecting there to be more than just one glass cabinet containing very little worth seeing.
I took a few photos of the good stuff that we saw today. There were quite a few exhibits of dull bits of broken pot that I didn’t photograph though.

From the museum we went to McDonalds for a spot of dinner. It was absolutely heaving with brats. I suppose this was only to be expected at half-term.
We then had a nosey round the craft shops. We found one selling Pentel pens. Pentel pens! – they were the business forty years ago!!
We came home via Fat Fish tackle where I got some line and some wafters, and via Chilham Garden Centre. I had a voucher for there for Christmas. I didn’t spend it.
Also on the way home we popped into Sainsburys to get some cakes to take in to work tomorrow, and to get the makings of dinner for tonight.

Once home we walked the dogs round the block, then I got my new fishing line onto the reel I bought with my Christmas bunce. That was a job I should really have done two months ago, but as long as it was done by next Monday, "My Boy TM" will be none the wiser.
I then spent a few minutes making a new “birthday video” which I shall post out to people on their birthdays.

"er indoors TM" then boiled up a rather good pizza and some Christmas pudding which we washed down with a bottle of plonk. Hic! As we scoffed and drank, we watched the DVD of “Early Man”. It was rather good.

It’s been a rather good day today. I’m now fifty-five years old, That is positively ancient. I’ve got to the “old” part. How much longer will it be before “maturity” and “wisdom” happen…?