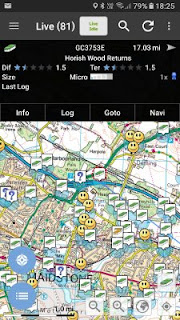 The late shift was surprisingly busy; for all that I might whinge about the night work, it is good to be able to get on with it in my own way sometimes.

As I drove home I was amazed at what I heard on the radio. Those who nearly destroyed the Labour party over thirty years ago are being welcomed back into the fold, whilst those few who until now have been the only voices of reason have knocked it on the head, left the Labour party and formed their own little club. The pundits on the radio were interviewing the apparent leader of this bunch (Chuka Umunna) this morning. He came over as rather rational and sensible; much like the gang of four did thirty-eight years ago. Mr Umunna was rather vague as to what his group are going to ultimately do. Will they just do their own thing and disappear (never to be seen again) at the next general election, will they form a new political party (SDP Mk II)?
You really would have thought that with the country being flushed down the toilet by what must be the worst Prime Minister ever and the government in disarray, the Labour party would be making the most of the opportunity and *not* making complete tits of themselves, wouldn’t you? The Prime Minister must offer up prayers of thanks every day for Jeremy Corbyn.

Once home I waved at "er indoors TM" in passing, then took the dogs round the park. When I’d left Maidstone this morning none of the cars were frosted over. As we walked up the road in Ashford, every car was covered in ice.
It was a beautiful bright morning today; but it was a shame to see that the KAC (“Keep Ashford Clean”) bin would seem to have developed some subsidence. As we walked Pogo made some new friends, all the dogs chased a poor squirrel, and apart from a quick roll in some fox poo we didn’t have any “episodes” at all.
As we walked we met OrangeHead who seems to be back with the “in-crowd”.

With walk walked I had a quick scrub, then over some toast I finally got to grips with GC-Droid; an app which I’m hoping will be useful for searching out film pots under rocks. I’ve used the NeonGeo app for years because it allows me to use ordnance survey maps. However NeonGeo is no longer available for download. I’m due for a new phone soon, and whatever geo-app I get, ordnance survey maps are a “must” for me. I can do this with GC Droid, I *think* I’ve figured out how to upload via GSAK, and in the circles I frequent you are nothing if you cannot upload via GSAK. I need to give the thing a serious field trial now.

I took myself to bed, and managed to sleep for just under five hours. That’s not bad during the daytime, really. The dogs did have a few shouting matches but having Treacle and Pogo upstairs did help minimiise that nonsense. Fudge stayed downstairs and instigated much of the shouting.

Eventually finding myself wide awake I got up and watched a couple of episodes of “Traitors” which the SkyPlus box has decided to download for me. It’s a good show, but does there need to be quite so many nudey sauce romps?

"er indoors TM" will be home soon. With any luck she’ll boil up some scran, and then it is off to another night shift.
Today was something of a non-event. The days between the night shifts often are.