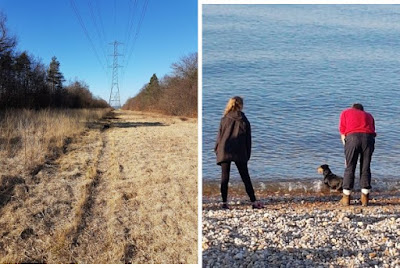 I slept better than I did last night. With "er indoors TM" and the dogs up in the attic room with "Stormageddon - Bringer of Destruction TM" I *wasn’t* trampled all night long. Mind you I was still wide awake about two hours earlier than I would have liked. Being wide awake I got up and watched the fourth episode of “The Umbrella Academy”. It’s not too bad – with only ten episodes I shall probably stick with it.
I then had a look-see at Facebook as I do most mornings. I had yet another friend request from someone I don’t know but in a novel break with tradition this wasn’t some odd-looking bloke in a dress who was advertising pornography. This was a Welsh New-Age hippie-loonie-type. I didn’t accept him on to my list. I’m actually rather choosy about who I have on my on-line list of friends.
I also had a few messages about some of the geocaches that I’ve hidden. There is often an arrogance in those who hunt Tupperware in that quite a few of them seem to feel that if they cannot find a certain magnetic pot stuck to a road sign then it isn’t there. God forbid that their sat-nav might be less than utterly perfect in every respect.  I was told this morning that the co-ordinates that I had provided for a certain hide were wildly out and were pointing into someone’s house. It clearly never occurred to the person telling me this that over a hundred other people had no problem with the co-ordinates that I had given.
Similarly I was told about a failing in a Wherigo cartridge making the thing unusable even though sixty other people hadn’t had a problem. And a Suduko puzzle that I had set which wasn’t giving the right answer even though fifty other people had managed it.

With "er indoors TM" showing no sign of stirring I went and moved her car for her. She’d left it round the corner where there are parking restriction after eight o’clock. I don’t like driving her car; it feels rather awkward to me.

"er indoors TM" had arranged to take "Stormageddon - Bringer of Destruction TM" off visiting relatives today. That was more than my nerves could take, so I took Fudge out with me for a little adventure. We drove toward Whitstable where we’d arranged to meet Karl, Tracey and Charlotte. As we drove along the M2 I realised the people in the car in front were waving at me. It was Karl, Tracey and Charlotte. I had no idea that it was them in the car in front. When I drive, to me all cars are just “cars” – I never notice who is in them.

As we walked up the Crab and Winkle way we met several cyclists. Most were friendly enough. One was rather miffed when Fudge nearly ran under his front wheels. Words were exchanged. Some cyclists can be rather brave when they can zoom off at high speeds.
We also found an old tennis ball which kept Fudge entertained. He actually ran after it rather than just trying to eat it., but he did run through quite a bit of mud with the ball.

The plan had been to eat in the Old Neptune on the sea front, but time was running away. We were all feeling a tad peckish and realising that it was well past mid-day and the Old Neptune was still a mile away we found a rather good pub. The Monument was a rather good pub. With Harviestoun’s “bitter and twisted” ale on the hand pump we sat outside (outside – in February!) and ate one of the best plates of fish and chips that I’ve had in a long time. It was a shame that Fudge disgraced himself; there was a little petting zoo in the pub garden, and Fudge would not stop hankering after the rabbits. It’s his nature, he can’t help it, but it was a pain.
From the Monument we walked along back roads past what must have been the world’s crappest memorial marker. We thought it was some war memorial, or something commemorating an important event. It was actually in remembrance of Whitstable’s first council estate.

We eventually got to the beach. It was as well that we’d eaten earlier. The glorious weather had brought people out in droves. Every table outside the Old Neptune was full. There were dozens (if not hundreds) of people milling about, and people were three-deep at the bar. I queued for ages to get served.
But it was a beautiful afternoon to stand on the beach. Fudge played in the sea. Several children were throwing stones into the water at which he was barking.
The weather today was amazing; Exactly one year ago today I wrote “Despite five layers of clothing and my new fingerless fishing gloves I was shivering”. Today I was standing on Whitstable beach in a T-shirt drinking beer (shandy) whilst Fudge was paddling.

From the Old Neptune we walked down to Seasalter. We had intended to go up into Trench Wood, but time had run out. We’ll go there another time.
By the time we got back to our cars we’d walked over thirteen miles, and I’d taken quite a few photos too.

We said our goodbyes, and pausing only briefly to drive the wrong way up a cul-de-sac we were soon on the way home. As I drove I realised something wasn’t right with the car. There was a very odd sound. I turned off my music and tried to work out what the odd noise was. Eventually I realised it was Fudge’s snoring.

We got home to find "Stormageddon - Bringer of Destruction TM" playing with his mother’s old “Polly Pocket” stuff. A shame Treacle had to eat quite so much of it.
After a rather good bit of dinner "er indoors TM" took littlun up to bed and I fell asleep in front of the telly. I woke several hours later…