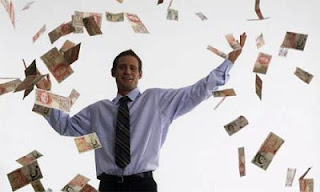 Over the last few weeks I've been blogging about the new series of "Yes Prime Minister". It started well, but hasn't really gone anywhere. We watched the fourth episode last night and I fell asleep. I don't think I can be bothered to carry on watching the rest.

"Daddies Little Angel TM" arrived with Sid shortly after brekkie time, and as she did her college work I got the latest batch of beer out of the bucket and into the barrel. And then got another load of beer into the bucket to be barrelled next week.
I checked my emails. The leccie company told me it was time to give them a meter reading so I logged on and nearly tiddled my pants in excitement. My account with them was over five hundred pounds in credit. I've been in credit before, and they have been only too happy to give refunds. So I thought I'd give up-to-date meter readings, see what was what and then ask for a refund. So I read the leccie and gas meter, typed in the numbers, pressed "Enter", and five hundred pounds credit suddenly became thirty pounds credit. Oh dear.

We then took the dogs for a walk. Through Newtown, past the Swan Centre, and home through Frogs Island and past the ponies. Sid nearly got run over by a passing cyclist, and Fudge shouted at a Shetland pony. All things considered a rather uneventful walk.
With "Daddies Little Angel TM" off on a mission doing whatever it is that "Daddies Little Angel TM"s do I set about the ironing. It took long enough. As I ironed I watched my "Voyage to the Planets" DVD. I've been looking for it for a very long time, and it came to light this morning. I must have seen the thing a dozen times, but still I like it.

Then I checked my post. I got to vote in the election of governors for the local health authority. Or that is I got the chance to vote. I didn't take that chance. Faced with four candidates of whom I had never before heard, and all of whom seemed to be blathering the same platitudes in their campaign addresses I realised that I could not choose between them, and so did not attempt to do so.
I got a begging letter from ActionAid asking for money to help the world's poor. I wish they wouldn't use such emotional blackmail.
Despite having told them (countless times) that I don't want it, I got yet another offer to have the Sky Sports channel at half price.
BT offered me the cheapest broadband deal ever. And it did seem a bargain until I read the small print and saw that all these deals were dependent on paying a monthly line rental fee which put the total price far beyond what I am currently paying.
But the best letter was from the bank. Having seen so many adverts for mis-sold PPI, a colleague approached his bank a few months ago and asked if he was entitled to anything. They gave him money. So a couple of months ago I did the same. I phoned the bank, and asked if I was entitled to anything from mis-sold PPI I might or might not have had in conjunction with any loans I've had with them over the years. Today they wrote back and said that they were unhappy that I had complained. (I hadn't complained; I'd asked if i was entitled to a refund). They said that they did not support or uphold my complaint, and that I was not entitled to any refund. But as a gesture of goodwill they would refund PPI payments totalling over two hundred quid. Result!

After a spot of tea "er indoors TM" set off to a congregation of the Honourable Association of Candlemongers. I slobbed on the sofa with Fudge and watched episodes of Babylon 5. I quite like that show. I should watch more of my DVDs. I have enough of them gathering dust...