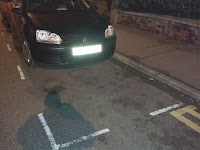 Insomnia has returned with a vengeance. Yesterday I woke at 1.30am and lay awake for most of the night. Last night I managed to sleep until 2.20am before waking. As I looked at the clock I noticed that Furry Face had sneaked up to lie on the bottom of the bed. Normally I would have marched him downstairs, but he was still and quiet, so I left him there. He's not been himself these last couple of days; seeming somewhat timid; almost afraid of something. I wonder what's up with him?

And so to work. As I drove there was talk of one TV company buying the rights to televise some football league. I don't know the details, and don't much care. But apparently this company's acquisition of the rights to screen these football matches means that thousands (if not millions) of people will change TV supplier. Personally I couldn't care less, but I know I'm in the minority here.
I stopped off at Pets at Home on the way. Furry Face needs dog food. I thought I'd get some collar barrel name tag thingies (for geocaching purposes). Pets at Home didn't have any. In fact they didn't have much of anything at all. The chap in the shop said they'd recently had a spate of shoplifting. Shoplifting! - it looked like the locusts had been; the shelves were that empty.

The last part of my journey to work is usually a drive of five minutes. It took twenty today. I found myself stuck behind a twit driver who was randomly doing emergency stops for no reason that I could determine. He would stop and hold up the traffic for extended periods because there was a mother with pram fifty yards down the road (on the pavement), someone coming the other way was turning left so he stopped whilst they did so. Oh my piss boiled.

I did my bit at work and came home where I tried to park. If only people would look at where they can and can't park, and park closer to the ends of parking bays, and not be obsessed with parking squarely outside their houses then there would be space for about a dozen more cars up my road...