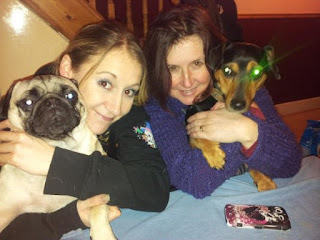 Fudge has discovered the fish tank. It's been in the living room far longer than he has, but last night he obviously noticed the fish in it for the first time and went mental at them. And today, periodically, he was woofing, barking and growling at them. It's rather sweet really.
The recycling binmen came today. This time they took the bin of tat. They didn't take the rubbish we put out on Wednesday because it was too close to the front door. They couldn't reach it from the pavement and (apparently) they aren't insured to walk the two steps from the pavement to where the bin was. It's interesting that the postman, milkman, those who deliver pizza leaflets, religious crackpots, trick or treaters and carol singers have no difficulty in traversing my garden path. Either they have more comprehensive insurance policies, are much braver people, or aren't quite so petty minded.

I took Furry Face for a walk. It was looking like being a fine day, and there were two geocaches on the other side of town that I fancied having a go at. As we walked along one of the paths past the station I let Fudge off of his lead. He was fine; coming back when called by his whistle. And then it all went wrong. He started in the general direction of some woman with a dog. As I called him back so she called him and waved her dog's toy to attract him. Of course that got his attention. As I walked up to put his lead on, so this stupid woman produced a second tennis ball (her dog was fetching one) and she hurled the ball which Fudge promptly sped after. I eventually got him back on the lead; having quite seriously offended the stupid interfering old cow by asking if she'd like to adopt him. She really couldn't understand why I didn't want her to call my dog away when I am trying to do whistle training with him.

With the pestilential pup on the lead we came along Hythe Road and down Cradlebridge Drive. One of the things that annoy me about Ashford is that between the railways and the motorways the town is cut into sections between which it is very difficult to move. Navigating to the first geocache of the day showed me a footbridge over the motorway which was new to me. I shall use this on dog-walks in the future. The first cache was just off of this footbridge. Apparently.
I couldn't find it, but a little later I had a stroke of genius and I think I know where it might be. I shall go back.
We followed the footpath on and soon found the second geocache. This one was relatively easy to find, and I got a trackable from it as well. The description of this geocache asked us to give a brief description of how we came by our cacher names. I use the same alias pretty much everywhere. If any of my loyal readers might be wondering, "Manky Badger" is an old C.B. radio handle. Back in the 1980s when C.B. radio was big, all of my mates had high powered names “Big this”, “Mighty that”, “Super this”, “Mega that”. I’ve never been “Super” or “Mighty”, and so I went with “Manky Badger”. It’s probably quite apt, and is a name which has stuck. I am “Uncle Badger” to many, and answer quite happily to “Oi Manky!” Very few people would do that. And the world is full of Daves anyway.

We then followed Willesborough Road past the Batchelors factory and the Julie Rose stadium, and took a footpath round the back of the Little Burton estate where we met a nice lady walking her dog. Her dog and Fudge played really nicely for ten minutes, then we went our seperate ways. And just as I was about to put Furry Face back on his lead another twit dog-walker made a point of calling him away. And again took offence when I was less than orgasmic that he'd interfered with what I was doing with my dog.
I wish other dog-walkers would have some sense. To be fair, most have. But there is a minority. When i see other people doing dog training I don't interfere. I put my dog on his lead and leave them to what they are doing. I wish these busybodies wouldn't meddle when I'm trying to achieve something with my pup. He's getting there with his training but he's easily distracted.

Once home I spent much of the afternoon preparing presentations for the astro club. And then in the evening we went down to Folkestone where we walked the dogs along the beach and had a rather good bit of tea featuring (probably) far too much to drink. Hic!...