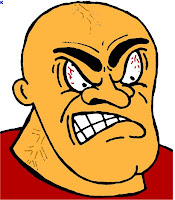 It has often been said that I am a creature of habit. Very much so with breakfast. When working normal shifts (as "normal" for me as is possible) I have cereals for brekkie; otherwise it's toast and coffee. Always! Without fail! Today in a novel break with tradition I had toast and coffee even though I was working a normal shift. Sometimes I can be quite the rebel!

And so, once toasted, I set off to work. It was cold this morning, but not cold enough for there to be ice on the car. Also the morning was noticeably lighter than it has been. I'm grateful for that.
The news on the radio was all a-buzz about the report into the scandalous treatment patients had received in Staffordshire hospitals. Shocking! Disgraceful! Or so we would be led to believe. What actually happened? At this remove in time we'll never really know. But realism will never sensationally sell newspapers, will it?

However, whilst terrible things may well have happened, spare a thought for those working in those places. Or in any establishment where one has a professional duty of care.
Does anyone actually go into caring professions to victimise the vulnerable? Or to be deliberately negligent? Hardly! So why does the media act as though people do. Why does the media delight in spreading malice against health care professionals?
What message does the job hunter and the school leaver get from all of this? Why would anyone want to go into a job paying less than what one might get in the private sector? Add to that a job which needs to be done at all hours, day, night, weekends and bank holidays? And one in which the slightest error or lapse gives the press license to pillory the over-worked.
Not that I'm in any way bitter or twisted....

On the way home this evening there was an interesting program on the radio about how high streets will be affected by the recent collapses of several big names shopping chains. I can't really speak for any other high street, but the one in Ashford has been (in all honestly) dying on its arse for some time. Having said that, the loss of the high street giants has probably been a good thing for me. With HMV and Blockbuster gone, CEX will take over with its cheap bargains. Woolworths... what did they actually sell? Nothing I can't now get cheaper in the pound shops. And I never ate in Pizza Hut anyway.
I've said before that I honestly think the entire concept of "high street shopping" is fast becoming an anachronism. Cheap pound-shops and the Internet have done for traditional shops. The pundits on the radio didn't entirely dismiss my theory out of hand...

And rather than going home I went to Sarah and Steve's for an astro club committee meeting where I almost passed a motion.