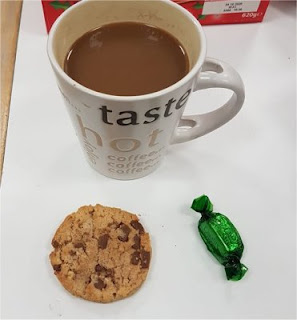 When I went to bed last night the Met Office had issued a flood warning for our local area. I was rather pleased to get up to find that downstairs wasn’t under water. I wasn’t quite so pleased to find a couple of turds on the kitchen floor (Sid?) but you can’t have everything.
I watched another episode of “Flowers” (which is getting weirder and weirder), then I had my morning’s rummage round the Internet. Facebook was rather disappointing this morning. I liked seeing the pictures my cousin had posted from her trip to London yesterday, and quite a few people seemed to have liked yesterday’s instalment of my Advent Calendar, but there wasn’t really much else that had happened. My Facebook feed was filled with adverts for new-age-hippy-nonsense from the Romney Marsh and adverts for some woman’s boyfriend’s skills as a handyman.
As a naturally nosey person, I wish more people would put up pictures of what they’ve been doing.

I drove round to the petrol station to re-fuel. Whilst there I got into a conversation with the nice lady behind the till. She told me that you can make a rather good Christmassy drink by dissolving Werther's Original boiled sweets in vodka, and then mixing the resultant juice with cream. I shall have a go at that...
On the subject of petrol stations I had a pang of guilt as I approached Biddenden. There is a petrol station there. The place is always festooned with signs exhorting the public to support them as they are a family-run business. I'd be inclined to support them if their petrol wasn't five pence a litre more expensive than Sainsbury's. Not counting my Nectar card I save a tenner a month by going to Sainsburys.

As I drove, the pundits on the radio were also talking about savings. Some politician or other was talking about the cost of military equipment.  What with all the talk of the NHS wanting funding there is a feeling that the armed forces are missing out. However it would seem that military spending seems to over-run. Take for example the navy's latest warship. The aircraft carrier HMS Queen Elizabeth II was supposed to cost three and a half billion quid. It actually cost double that (and that was without any aircraft to carry). The chap being interviewed tried to claim that this massive overspend could be justified by sailing the ship round the world frightening "Johnny Foreigner" by showing that a post-Brexit Britain was still "Billy-Big-Bollox".

I got to work... there were quite a few sweeties to be had on the run-up to Christmas. Note that it is still "the run-up to Christmas". It never fails to amaze me how many people have so much time off work at this time of year. As I checked the Internet this evening I saw that even more people have packed up work and quite a few are already going away.

I shall stay home and scoff. I think I might have to go on a diet in the New Year. Again…