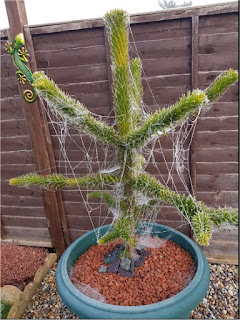 I slept right through until the alarm went off this morning. That rarely happens. I got up, made brekkie and watched another episode of “Big School” before sparking up my lap-top.
At the weekend I saw the Lego maxifigure family at a bargain price on eBay. It arrived yesterday… I say “arrived” – it wasn’t so much “delivered” as left laying in the front garden.
Last night I posted a picture of it on one of the Lego Facebook pages I follow. It had received a few comments. All complimentary, but one or two more interested in how I could sell the set at a profit rather than enjoying it for what it is. I suppose I did get a bargain, but I’m not overly keen on selling it just yet.
I also saw a friend was having her birthday today. I sent a little message and again had more than a pang of jealousy. This friend bought her first house in the mid 1980s like I did. And paid about the same price as I did. However her house was a stone’s throw (with a catapult) from London’s docklands area. Within a year the Docklands development took off and she sold her house for over ten times what she’d paid for it.
She bought something palatial in the country, gave up blood testing and re-trained as a primary school teacher. She soon become head teacher and retired to the most beautiful cottage a couple of years ago.
Meanwhile I’m still the wage slave in a terraced suburban house.
Don’t get me wrong – I’m not unhappy with my lot. I just want more. And I’ve probably left it rather late in life to get it.

As I walked out to my car I nearly fell over (twice) on the ice on the pavement. It was cold, icy and foggy. But on the plus side it was that cold that the ice just scraped straight off the windscreen.

As I drove to work the pundits on the radio were talking about Bob Willis. He was something big in cricket in the 1970s. This made me think - there was a *lot* of air time dedicated to him, and I'd never heard of the chap. How much else is there of national importance of which I am totally oblivious.
There was then an interview with the Home Secretary Sajid Javid in which he utterly ignored every question put to him. Instead he just parroted that the Conservatives are better than Labour because Labour are crap. Hardly sound impartial reasoning there?

It took an age to get to work today. I would have made far better time had someone living on a rather narrow road not had a major delivery from B&Q. You'd think sending a delivery on a lorry which was wider than the road (at rush hour) would be something they'd try to avoid, wouldn't you?

I got to work and downloaded an new e-book. I seem to get through a lot of these. Much as I like e-books as they take up no space at all, as a reader I have no idea just how much I'm getting for my money. Take this current e-book - it's the third in a series of three. Each costing over three quid. Together they probably don't make up what you'd get in a "regular" paperback book.

With "er indoors TM" out this evening I was left “Home Alone” so I watched a film on Netflix. I say “watched a film”; I turned “Dirty Grandpa” off half-way through. It was utter tripe.