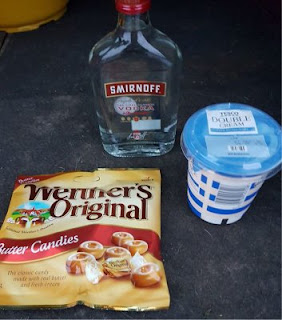 I got up to find that "er indoors TM" had put the Christmas tree up. That was nice.
It was rather wet outside at six o’clock when I chivvied Sid out for his morning rake-out. Fudge went of his own accord (despite the rain) but I don’t trust Sid not to “go” on the kitchen floor. He can be lazy like that.
Over brekkie I watched another episode of “Flowers” (which is getting decidedly weird), then had a look at the Internet. It would seem that quite a few friends have been to see the new Star Wars film. Back in the day I would have organised an outing to go see it mob-handed at the midnight showing. (Possibly). Mind you I must admit I’ve still not seen the last Star Wars film. They’ve never really appealed to me. If you see one, you really have seen the lot.
Other friends were posting from foreign holidays around the world. I was a tad jealous. Still… I’ve got holidays planned for next year.

I'm not sure that the flood warnings should have been lifted; as I drove westwards to the roads were very wet. There were huge puddles, and the entire road was under water in several places. Ironically it was as I drove through the worst of the floods that the pundits on the radio were talking about how Brexit will remove all sorts of fishing quota restrictions from the British fisherman. This boiled my piss on several scores. Family friends who have been commercially fishing from the Hastings beaches for years have bored me to death on this subject many times, and I shall share their sage wisdom...
Firstly the fishing quotas are there for a reason - you can't take all of the fish out of the sea and expect commercial fishing to remain a viable proposition. And why does it take Brexit for the British fishing fleet to be free of the European restrictions? The French fishing fleet have *never* followed the European rulings (they've been in the news about this several times). And why does anyone expect the French to respect the British  territorial fishing zones when the French have been fishing it for years (they've been in the news about this several times as well)  because by ignoring the quotas they emptied their traditional fishing grounds years ago.

As I drove a Rabbi spoke on the "Thought for the Day" slot, and he was quite engrossing. I had no idea what Hanukkah was all about; the chap brought the thing to life for me.
Interestingly no one on the radio wanted to mention that aliens have been up to no good.
Apparently when compared with star maps made fifty years ago, modern star maps would seem to show that about a hundred stars have vanished. What's that all about? Where have they gone?

Yesterday I mentioned that the nice lady in the petrol station had told me about making some odd cocktail with Werther's Originals, vodka and cream. I stopped off at Tesco to get some of each, then went in to work.
And with my bit done I came home. With "er indoors TM" off out on the razzle I was in sole command. There's no denying that the dogs take a lot more notice of her than they do of me. It started badly when I came home to a rather humungous turd. I’m not entirely sure who it was, but the smaller dogs were (obviously) not to blame, and when we all went into the garden, Fudge, Sid and Treacle all did huge turds of their own whilst Pogo stood looking rather sheepish.
They then had their dinner; I had mine. As I scoffed it I put the Werthers sweets into the vodka. It’s all gone an interesting brown colour. It’s looking rather promising… I wonder when I put the cream in?