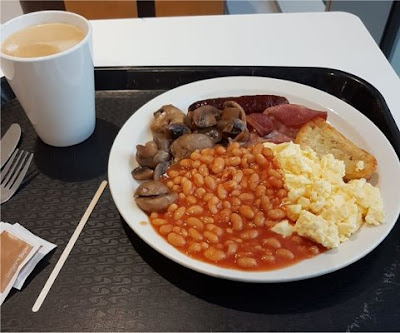 Having wasted much of yesterday evening fast asleep on the sofa in front of the telly I then found myself wide awake for much of the night, finally nodding off just before the alarm shouted at me.
I had some more of that cherry brandy jam on toast for brekkie. It’s not all that good. As I scoffed it I watched another episode of “Flowers” in which Fat Mildred did not make an appearance, but Fat Mildred’s paramour’s sister was branded as a “sapphic succubus” so that was something of a result.

The Internet was something of a disappointment this morning; my Facebook feed seemed to be filled with people trying to get money for stuff which really they should be taking to the tip. A bit like me with those beer glasses. And with no emails at all I turned off my lap-top and went to my Advent calendar.

As I drove to work I reflected on how I've been whinging lately about these dark and dismal mornings.  But I'm not really complaining. I knew what the journey would be when I applied for the job three years ago, and there is no denying that I am far happier working where I am rather than where I was. Three years ago I would feel physically sick every morning at the thought of what trivial piece of pedantry the boss was going to blow out of all proportion. And I quite like my drive.  When the dawn breaks the drive is through some rather pretty parts of the work. And I get to listen to the radio too.
This morning the pundits on that radio were interviewing prospective leaders of the Labour party. Having finally realised that Jeremy Corbyn was the worst thing that the Labour party have ever done (since their last great blunder) they are now looking for a new leader. Those interviewed were banging on about how the Labour party faces an existential crisis and how it is about to collapse in on itself. In fact they were saying all the doom-and-gloom that was being spoken about the Conservative party only six months ago.
I alluded to this yesterday; politics is so transient. What is immediate and pressing today is very soon forgotten tomorrow.
Talking of politics there is currently consternation in the House of Commons.  The new Speaker of the house, Sir Lindsay Hoyle, has decided that in order to bring respect and dignity back to politics he would wear the ceremonial wig that the Speaker has always worn.
However it's gone missing.
Apparently no one has seen the thing since it was last used in 1992. Has someone nicked it for financial gain? I'd be intrigued to find the going rate for a purloined ceremonial syrup-of-figs on eBay.
Some wig-maker has kindly offered to supply a new one at a cost of over a thousand pounds. I can't help but think that this is an economy that he country could do with making.

I got to work; as I walked in the smell of the cooked breakfast was so good that I couldn't resist it. I had quite the fry up. Usually a Full English breakfast sets me up for the day; unfortunately this one just gave me wind.
I farted through what turned out to be an otherwise not-too-shabby day…