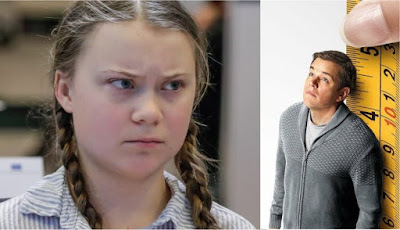 Over an early brekkie I watched another episode of the National Geographic Channel’s “Mars” series. It was rather good. As I watched I sorted undercrackers and ended up with quite a few odd socks. How does that happen?
I sparked up my lap-top to send a birthday video to my brother, and on seeing nothing had happened on-line overnight I put my undercrackers away (because Treacle would have them if they were left out) and set off to find where I left my car yesterday.

Bearing in mind the weather forecasts had been talking about very mild weather I was rather surprised to have to scrape quite so much ice off of my car this morning.
With ice scraped I set off to work. The pundits on the radio were talking doom and gloom about environmental catastrophe. Today's guest editor of the morning current affairs program was the environmental activist Greta Thunberg and she ran the show in pretty much  the same way she seems to have captured the world's attention. Whilst I don't want to detract from Ms Thunberg in any way, she strikes me as being very full of concern and anger, but very short of any practical ideas.

I got to work and checked my emails. It had been rather early when I left home. I might have had an email in the meantime, but no. I had been hoping for a notification of a new geocache. Over the last seven years this has become something of a way of life. Something to do with an odd five minutes; a guided dog walk. Always going somewhere different... Always? Perhaps not for much longer. Over the years I've found twelve thousand of the things; an average of one hundred and forty a month. in this last month only fifteen new ones have been created within thirty miles of home. For all that there are a *lot* of friends who go out hunting for film pots under rocks, there are precious few people who actually hide the things for us all to go searching for. I particularly like series of caches which form the basis of our weekend dog walks; I've got maybe half a dozen such series left within an hour's drive of home. There's few enough people who hide caches; very few who hide a series of twenty or so.

As I drove to work this morning I did have a wry smile at the weather forecast which spoke of a mild morning with only isolated patches of frost. Ashford was frozen. I drove through thick fog which last ed all the morning. As the fog cleared at mid-day so my phone beeped. A "Yellow Alert" warning of possible fog.
In the last year the weather forecasts have got noticeably worse.

"My Boy TM" sent me a message as I worked. The fishery were we sometime go to drown maggots is up for sale. At a shade over a million quid I spent much of the day wondering just how anyone could afford to buy it. Clearly some people can, and clearly I’ve made seriously wrong life choices because I can’t.

An early start made for an early finish. I came home and met "er indoors TM" and the dogs at the park, then took "er indoors TM" to collect her car. Having spent a small fortune getting it fixed, the nice man in the garage gave he a list of things (as long as your arm) that needs doing to her car.
As "er indoors TM" boiled up scran so I strained my brain trying to solve some puzzle geocaches in the Tonbridge area. I solved some, but there are still some that have me foxed.
As we scoffed a rather good bit of dinner (washed down with Bulgarian Merlot) we watched a film on “Netflix”. “Downsizing” started good but it went on. And on. Like so many films it would have been so much better if it was a *lot* shorter.