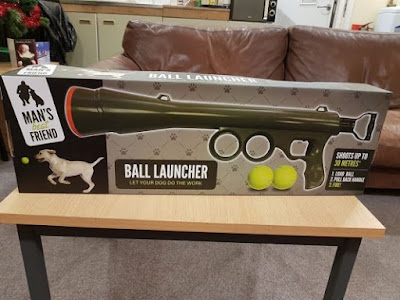 When I got to work last night, not having been at Maidstone work for a while I checked the "secret Santa" box. The pressie with my name on was the biggest one. And seeing how I wouldn't be in during the daytime today (when the pressies get opened) the late shift who were going home and my night colleague all agreed I could open my pressie. I got a bazooka-thingy which fires tennis balls up to thirty metres. I'm hoping for great things from this with regard to keeping the dogs entertained. Fudge has never been big on chasing tennis balls (he prefers to eat them) and chasing anything is too energetic for Sid, but I have high hopes for Pogo and Treacle.
As the day wore on I saw that the chap for whom I’d bought the “secret Santa” gift had posted a photo of it on Facebook and seemed to be happy with it. I was pleased about that – buying a pressie can be difficult… or (to be precise) buying the pressie is easy – buying something that someone wants is difficult.

In the past I would traditionally do the night shift of the day before Christmas Eve. "er indoors TM" and the children would go down to Hastings, and I would follow on the train on Christmas Eve morning. My brother would meet me at the train station, and we would drink ourselves silly before going round Sainsburys in a drunken frenzy buying all sorts of stuff we didn't need or want. We really should do that again some time.

The early shift arrived and I set off. As I drove the pundits on the radio were interviewing various members of the legal professions who were all rather concerned about how difficult it is to convict murderers. Witnesses aren’t overly keen to squeal people up for fear of retribution from the friends of the accused. You’d think the legal professions would have investigated this years ago…

I got home and took Fudge, Treacle and Pogo out. "er indoors TM" was collecting "Daddy’s Little Angel TM" and "Stormageddon - Bringer of Destruction TM" and was going to visit relatives. We thought they might like some “Sid Time”.
I took the other three hounds to Orlestone Woods where we had a rather good (if muddy) walk.
I like Orlestone Woods. You pretty much get the place to yourself, and any other dog walkers you meet generally seem to understand what dogs are like and consequently you get far fewer “episodes”.
Just as we finished the walk so I got a text message. The "er indoors TM"-mobile had gone west.
The thing had been problematical on Saturday but having had a little episode of its own it seemed to recover. I did suggest taking it to the car doctor on Sunday or yesterday, but I was over-ruled. Far be it from me to say “I told you so”, but this morning the thing threw in the sponge in a quite spectacular fashion.
I took the dogs home, we all had a bath, and I went to bed.

"er indoors TM", "Daddy’s Little Angel TM" and "Stormageddon - Bringer of Destruction TM" decided to carry on with their mission using my car. They came home to collect it, then set off leaving me wide awake.
I tried to get back to sleep, but I wasn’t happening. So I set about laundry whilst watching the second season of “Mars” on Netflix. It is quite watchable, but (like so many TV shows) it tries to feature genuine science whilst having no idea whatsoever what genuine science looks like.

After a while "My Boy TM" came round and drove me back to his house. "er indoors TM" eventually joined us, and we had a good evening. Far too much to eat, and a good time spent playing the “Family Fortunes” game.
I never knew that the first fruit of my loin was such a fan of Carol Vordeman…