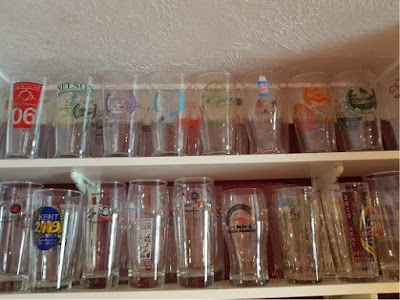 I woke in the small hours in something of a cold sweat. Jeff Lynne (the front-man of the Electric Light Orchestra) had hand-picked me to be the lead saxophone player on his new album. Having been paid an extortionate amount of money I was desperately trying to cover up the fact that I’d not touched my sax in over four years.
As I became more and more panic-stricken at being discovered to be the world’s worst saxophonist, at no stage did it occur to me that I might actually get the instrument out and have a little practice.

Seeing as it was only a week till Christmas I opened the Christmas jam for my brekkie. It had to be said that cherry brandy conserve was something of a disappointment.
As I scoffed toast I watched another episode of “Flowers” (which featured another appearance from Fat Matilda), then I had my usual rummage round the Internet. Sparks have released a new single; it’s rather catchy, and quite topical. Mind you, there’d not many bands still going forty-eight years after their first album was released. I sent out birthday wishes to family and friends on Facebook, and then had a look at my emails.
B&Q had sent me a rather apologetic email. They felt they were unable to post the review I’d written about the lawnmower I’d bought from them recently. I’d written:

“It's a f***ing lawnmower. Will you stop bombarding me with emails about the most trivial things. Are you *really* monitoring every single thing I buy? If so, this will be the last thing I ever buy from you. And I will advise family and friends to similarly take their money elsewhere”.

Such a shame they felt they couldn’t publish the review; I felt it summed up my purchasing experience quite succinctly.

I then had a little look-see at the box of Lego that "er indoors TM" picked up from the post office for me yesterday. A week ago I said of the thing “I've handed over my money... here's hoping the bargain arrives”. It has turned out to be quite the bargain. In addition to the bits I wanted I’ve also got eight maxifigures, two motors and some road-baseplates. I might redesign the train track on my Lego town to incorporate those base plates.
Talking of Lego I then opened today’s window of the Advent calendar (to give me something to ponder during the day), got dressed, and set off to find where I’d left my car.

I headed westwards through the driving rain on a rather dark and dismal morning and chuckled as the weather forecast talked about the possibility of light showers in the South East. As I drove there was talk of the European Space Agency's latest mission which will hopefully examine planets orbiting other stars. It never fails to amaze me just how little air-time things like this gets compared to the adventures of politicians which are forgotten by the next day.

I got to work; I did my bit. As I worked so my phone beeped with a message from the hospital where I'd spent much of last Friday night. Would I recommend them to family and friends? No I would not. Why not... Well. now they've asked I feel justified in telling them their shortcomings.
Facebook messenger also messaged me. Had I sold those glasses that I advertised the other day? If not would I like them to re-advertise them? Yes please. Mind you I doubt that they will sell. I think they are destined for the dustbin.
Do any of my loyal readers want souvenir beer glasses? I don’t…