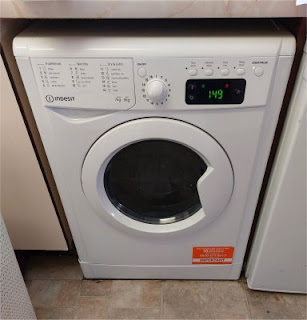 I knew we wouldn’t get a lie-in this morning. Yesterday we had a message that the new washing machine was being delivered between seven and ten o’clock. At eight o’clock we got a call to say the thing would be with us in fifteen minutes. It rolled up an hour later. As “er indoors TM” tried to shut the dogs up I went and hid in the attic room as I’m supposed to be isolating. I say “supposed”; I am actually isolating. It has to be said that it is a rather dull pursuit. I’ve now been isolating since Friday evening and I’ve not seen anyone other than “er indoors TM” (and the dogs)

It didn’t take long for the nice men to drop off the washing machine (and to vent the house afterwards), and as they went so my phone beeped. The PCR COVID test “er indoors TM” had only posted for me yesterday morning already had a result. Negative! Although this was entirely expected, it was something of a relief.

I made toast, and as “er indoors TM” cleared up the mess made by the washing machine’s installation I had some toast. I did offer to help with the clean-up but I am reliably informed that I get too stressy doing that sort of thing. In retrospect I’m glad I was well out of it; the shoe rack didn’t survive the ordeal and I’m glad I didn’t get the blame.

With toast scoffed I had a little look at the new washing machine’s instructions. As with any kind of electronic device it comes with far more capacity and ability that is ever going to be used. There are sixteen settings of which no one would ever use more than four. “Whites”, “Colours”, “Fast Wash” and “Tumble-Dry” is enough for anyone, isn’t it? Mind you there’s a minor issue in that the “Colours” setting seems to be about half an hour faster than the “Fast Wash” setting, but I’m sure I’ll figure it all out. I must admit I’m glad we didn’t splash out on the next model up that came with a Bluetooth attachment. It really did – you could control that one from an app on your phone.

I set it going on some T-shirts and left it to do its thing as I peered out of the window at a rather bright day. We could have had a really good walk somewhere today… but rules are rules. I had to isolate.

So… today was dull. The new washing machine really was the highlight of the day. I put it through its paces as it washed four loads whilst I sat on the sofa and watched the telly like a thing possessed.

I’m not allowed out of the house tomorrow either…