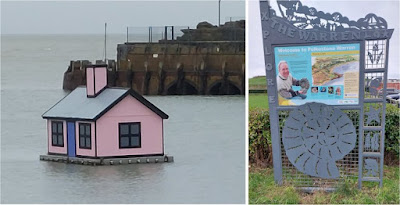 I slept for eight hours last night which was a result. Over the last week or so I’ve been woken by backache which is actually a good thing; if I lie in bed too  long I get backache, so it shows I’ve been sleeping.

I got up, set a COVID test incubating, and made brekkie which I scoffed whilst peering at the Internet. Someone had got a burger from the local McDonalds this morning, seen the bun had been sliced in something of a hurry (the bun wasn’t sliced symmetrically) and had posted the photo to the local Facebook group trying to say that someone had bitten a lump out of it before it was served to him. That group is always good for an argument but this morning the opinion was unanimous. Everyone saw a hurriedly sliced bun and told the complainant to get a life. And rightly so. Isn’t this just typical of our times? Rather than taking your complaint to someone who can do something about it, people just go straight to social media.

And a kite-making friend was telling the world how elastic is cheaper in Hobbycraft and strong glue cheaper in Dunelm (or vice versa). This reminded me of my grandmother who used to take me shopping when I was young when my mum was at work. She would take me to one store where she would buy nothing. Instead we would walk up and down all the aisles, then go to a pre-determined point where gran would meet her chums. Each of them would have checked out another supermarket before the meet-up. Then all of the gang would compare prices of every single item in every single shop in town. The gang would then disperse and we would spend all day traipsing all over the town getting the week’s shopping from half a dozen widely spread-out different shops; getting each individual item from where it was cheapest. We would also meet up with “Gran’s Gang” at least twice more during the day to give and receive price updates. Admittedly my gran (and her gang) might have saved a few pence (d pence not p pence) but would have spent all day doing it when it could all have been bought from the same shop in less than an hour.

I would say “happy days” but they were rather tedious.

And then I realised I’d left it too late to get involved in the litter-picking that was happening in Viccie Park this morning.

As I piddled about on “Cookie Jam” so someone from the Carphone Warehouse phoned trying to sell me one of their phones. Feeling evil I asked him how he decided which phone to get when he last got one. He made the mistake of saying he compared all the phones that were on the market at the time. I pounced on this. “So you *didn’t* but the first one the bloke on the phone tried to sell you?”

He had to concede defeat.

Also as I piddled about on  “Cookie Jam” Treacle jumped onto the sofa with me and started a fight. She lulled me into a false sense of security by sucking on my pyjamas then started trying to chew my arm. I took this as my cue to get off my bum and do something.

As I got dressed so Pogo tried to pick a fight with me as well.

We drove down to see “Daddy’s Little Angel TM”. Somehow or other we acquired a load of her dirty laundry and had been charged with sorting it out. And having sorted it out we also had the task of taking it back to her.

We stayed for a cuppa, but the dogs were a tad excitable so we said our goodbyes and took the dogs for a little walk. We drove on to the East Cliff where we parked up and had a good walk across the hill top down to the top of Tontine Street, then through Payers Park and down the Old High Street to the harbour, and back to the car. Coming along the stretch of beach just past the harbour was interesting – there were a lot of people with wet suits and surfboards. They looked to be having fun. I wonder if they make surfboards in my size?

As we walked things were “getting urgent” but all of the public conveniences were only going to open between Easter and September. What was that all about? Do Folkestonians only pee for half of the year? From the harbour we had a quick look round the Warren, but only a quick look. The mud was rather against us. I took a few photos of our outing when I wasn’t needing both hands to stop myself going arse over head in the mud.

As we came home I Munzee-ed like a thing possessed up the motorway. With surgery planned for a week tomorrow I’ve effectively only got a week in which to achieve great things.

“er indoors TM” did her trademark move of boiling up a rather good bit of scran, and we scoffed it (with a bottle of plonk) whilst watching “Richard Osman’s House of Games”.

I think I might have caught the sun today… maybe an early night?