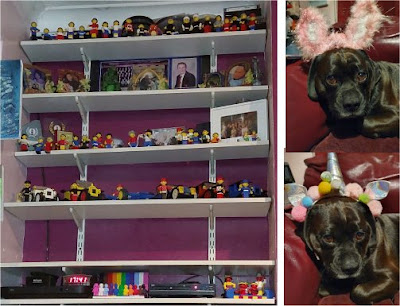 I didn’t want to be up quite so early this morning but as part of the work-up to Tuesday’s planned nose op I had to do a COVID PCR swab this morning. The instructions said to do it at seven o’clock. I’m sure that the time was utterly irrelevant, but following the instructions is always a good idea.

Once swabbed I scoffed toast, antibiotics and steroids whilst watching a couple of episodes of “Superstore” before having my usual rummage round the Internet. Not much was going on, so I sent out a birthday video and wrote up a little CPD.

By nine o’clock I was going stir-crazy. Another part of the work-up to Tuesday’s planned nose op is that I have to self-isolate for the three days before the operation. So that means I have to stay indoors and avoid everyone else. I’m apparently allowed to associate with “er indoors TM” provided that I keep her at arm’s length and she avoids plague pits.

“er indoors TM” took my swab to the priority postbox and I made a start on the improvised plan for the day. There is only so much telly I can watch, so I had this plan to clear some space on the shelves. I had two shelves filled with souvenir glasses from beer festivals we went to twenty years ago. Much as they are nice souvenirs, they just gather dust. They are now in a box awaiting disposal (of some form). I cleared the mess on the shelf behind the telly, re-organised all the clutter so that I’ve got a shelf clear for a Lego project I have in mind and suddenly two hours had passed.

“er indoors TM” came home and I watched some episodes of “Four In A Bed” in which everyone was everyone else’s mate right up until money was involved when it all got a little bit nasty.

“er indoors TM” then had a plan to sort the DVDs. It was a good plan. We’ve got two shelves of DVDs in the hallway and various other ones scattered all about the house. We’ve estimated the total as being somewhere over five hundred DVDs (possibly over six hundred) and they did rather need sorting. After a few hours we had sorted (about) three hundred and fifty feature films in the hallway, twenty kiddie DVDs on one shelf in the living room, and about sixty TV shows on DVD on a shelf behind the telly. We’ve not looked at the one hundred-plus DVDs of mine I’ve got upstairs.

As we tidied we found some sets of bunny ears and unicorn horns, and “er indoors TM” dressed up two very unimpressed dogs.

“er indoors TM” boiled up some dinner and we started a rather long-term project to watch all of the DVDs and chuck out those that we don’t like. The first one stays. “Avatar” was (is) a watchable film, but in many ways I found it reminiscent of the first “Star Trek” film; perhaps an hour longer than it needed to be with too much emphasis of the special effects.

I here there is to be a sequel to that film coming out next Christmas.
Posted by Manky Badger at 10:57 pm