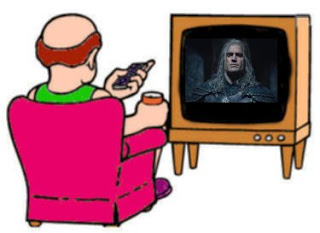 I had this naïve idea that the dogs might go downstairs with “er indoors TM” when she got up this morning, and I would then have something of a lie-in. It was an idea I persisted with long after it became clear that I was wasting my time. When the dogs weren’t running round shouting downstairs they were coming up and dabbing at me telling me it was time to get up.

I set the washing machine loose on a batch of undercrackers then set about the ironing. As I ironed I watched the last two episodes of “Superstore”. They were expertly made, and rounded of the series very well.

And then I watched a film I’d seen advertised on Netflix. “Mother/Android” which was… I would say “crap with a capital turd” but the review website Rotten Tomatoes describes it as ”… transcends its budgetary limitations on a visual level -- unfortunately, this sci-fi drama is less successful on the storytelling front” which is rather tactful. Have you seen it? If not, don’t bother. It starts off with the rise of the androids who go from subservient slaves to mad killing machines for no apparent reason. Just as they go ape we find our heroine is pregnant. She (and the baby’s father) then wait around in a tent until she goes into labour before heading off to a place of safety several thousand miles away. The labour lasts long enough for them to find an army base, pick a fight and then get kicked out. And then carries on long enough to find a motorbike in pieces, rebuild it and drive hundreds of miles through pine forests. It had to be said that the labour pains were beginning to kick in when heroine rescued boyfriend from the mad killing androids… and then in a totally predicable turn of events she then led the mad killing androids into the one place of safety left to humanity.

I rather lost interest toward the end. Sorry for any spoilers, but as I said, I really wouldn’t waste your time on it.

With ironing ironed I made a start on my new Coursera course “Astrobiology: Exploring Other Worlds” as the tumble drier had a go at drying the undercrackers. That new washing machine is odd… some numbers come up on the display when it is doing something. Those numbers look like a timer, but aren’t. When I set the tumble drier going the display read “4:15” but it was finished in just over an hour. I wonder what that is all about?

And with undercrackers dried and sorted I sat and binge-watched loads of episodes of “The Witcher” until “er indoors TM” came home and boiled up dinner. As she went off bowling I binge-watched more. The Witcher” might be far-fetched and have murderous elves and psycho-mages rather than mad killing androids, but it has believable murderous elves and psycho-mages and (something which is sadly lacking from a lot of TV shows) a plot.

It has to be said that this self-isolating is doing my head in. I shall be glad when it stops tomorrow. I shan’t be so glad about the surgery but there it is.