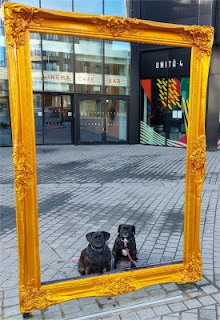 I had an early night last night (which wasn’t entirely unexpected) and found myself wide awake at half past one. I had a tiddle, went back to bed and lay awake for half an hour. I was a tad sniffly so I wondered if starting the sinus wash-outs might be a plan. After sinus surgery you are supposed to squirt salty water up your nose to clear out the gunk (how delightful). Last time I did this (two and a bit years ago) I made the saline solution too strong and felt quite ill for an hour after each wash, but having eventually read the instructions I now make the stuff to the right recipe. So, suitably armed with a pot of saline and a syringe I stood over the bathroom sink and syringed away in the small hours.

I was surprised at how little gunk came out. Mind you looking at the photos taken at the operation yesterday there was a lot less chopped out yesterday than there had been last time, so here’s hoping.

However sinus douching isn’t really restful, so I watched an episode of “The Witcher” before going back to bed just after four o’clock. I dozed for a few hours, but probably never longer than fifteen minutes at any one time.

Unlike yesterday I was allowed toast this morning, and I scoffed it whilst peering into the Internet. I had a message from the hospital asking me to fill out a feedback survey form. I told them they did very well yesterday. I decided against mentioning the disruptive half-wit in the bed opposite. I suppose that he was probably as scared as I was, but we all show it differently.

The (attention seeking?) selfies I’d posted from the hospital bed yesterday had garnered over a hundred reactions from various friends and family, and a lot of rather good comments too.

Six Facebook friends had a birthday today. I sent out my birthday video to them all, and seeing that not a lot was happening in the e-world I got dressed. I was (and am) under orders to take it easy, but a short dog walk wouldn’t hurt… Would it?

We walked up to the station, along to the new cinema, back across the railway, once round the park and home. Not that I want to feel sorry for myself, but that might have been a tad keen; I was a sweating mass when we returned. But I was glad to get out. What with three days of isolation followed by yesterday in hospital it was good just to walk round the roads idly chatting to other dog walkers and to the young mothers as their toddlers fussed the dogs.

We only had one “episode”; there is a Red Setter who Pogo always shouts at, and he did again today. I wish I knew why. The Red Setter is a lovely dog. The chap with him is very friendly and understanding and treats it all as a great joke. But every time we meet, Pogo *always* has to shout.

Once home I sloshed out my sinuses again (yuk), made a cuppa and had a well-deserved sit-down. I tried to do some of my Coursera course, but the videos wouldn’t play. I eventually got to see then by downloading them, and then I had a little think about the geo-meet I’m planning in February. Do people want to meet inside or outside. Outside because of COVID worries; inside because February is cold. I have a plan… and once I’m allowed to drive again I shall make a start on it.

“Daddy’s Little Angel TM” came to visit for the afternoon. Having had a scan this afternoon she is getting bigger every day.

We had a good laugh watching “Deadly Cuts” on Netflix. A rather good film – far better than the tripe I watched on Monday. And then we had a whale of a time taking the piss out of “Ancient Aliens” on the History Channel in which pretty much everything in human history is put down to aliens.

“er indoors TM” then drove the most recent fruit of my loin home, and she herself vanished upstairs to Zoom at her chums. I shall do a little more Coursera, then I think a sinus wash-out (yuk!) and an early night might be a plan.

It is odd… where I had the surgery isn’t bothering me at all. But my lower lip is incredibly sore and bruised. Thinking back I can remember seeing other people coming out of the operating theatres yesterday with ventilation tubes in their mouths. Had my lip been trapped against the tube for the duration of my gassing? It certainly feels like it. And my left wrist is *really* painful. Did it get a clout whilst I was under the gas?