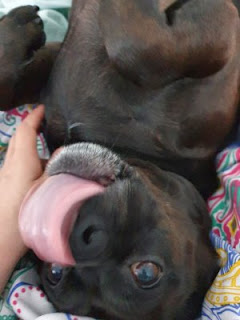 I lay awake for much of the night listening for Treacle to get up and be sick, or to move about, or to do anything but just lie there fast asleep.

She got up a minute after “er indoors TM” got up, growled at the puppies, and then scoffed her brekkie.

I scoffed mine and had my usual trawl of the Internet. My Facebook feed this morning featured some utter drivel from a religious nut who had a video with proof of the existence of Jesus. Apparently every other superstition’s founder has bones kicking about somewhere. Because there aren’t any bones of Jesus to be found anywhere proves Jesus is alive(!) By the same argument millions of other people who’ve died throughout history and left no detectable remains (thousands of years later) are still alive as well? Using this logic you can prove the existence of the Great Green Arkleseizure, the Great Prophet Zarquon, and my Auntie Keith….

I also saw that I’d missed the Pram Race in Hastings yesterday evening, and that people were travelling up to Derbyshire for the annual geocaching Mega-meet-up. I wouldn’t have gone to either, but it would have been nice to have known they were taking place.

She’s got some medicine.

As we came out I rolled my eyes as some scrawny-looking bloke lost the fight he was having with a Great Dane. Why get a dog which is far stronger than you are?

We came home, and I had a little look at the pond. The pump is too much for the smaller filter box which was leaking quite impressively; so much so that the pond had lost eight inches of water. So I took the foam out of the filter (that will speed the flow), ran out the hose pipe and left it filling whilst I ironed seven shirts. And then with shirts ironed and dogs settled I drove round to B&Q. Once the nice man in the pond shop gets me my second filter box I will need to plumb it all in. On Monday I got the hoses and the Y-junction. Today I got the jubilee clips and the waterproof box for the electricals.

And then I popped down to see “Daddy’s Little Angel TM”. She wanted to borrow the pressure washer. She claimed she wants to clear up her back patio area; I suspect it will be more along the lines of something for “Stormageddon – Bringer of Destruction TM”  to play with. He’s played with it in my back garden before.

I came home with Pogo; he’s coming on holiday with us.

There was all sorts of stuff I could have done during the afternoon but instead I just sat with the dogs until “er indoors TM” came home. We got as much packed as we could, then had KFC for tea – it is the start of the holiday after all.

As we scoffed we watched “Dogs Behaving (Very) Badly” on the telly. Much as I like the show I wonder if continuing to watch it will be a practical proposition. Morgan didn’t like seeing the dogs and spent much of the time barking at the telly.