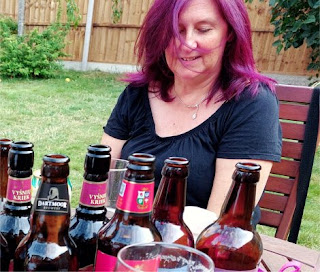 Once I’d taken the puppies outside to do that which puppies do outside I opened the door to upstairs so they could have their hour or so in the morning upstairs. Within two seconds Morgan and Bailey came back downstairs and looked at me with rather pathetic expressions. Treacle was guarding the top of the stairs and wouldn’t let them pass.

With dogs sorted I made toast and watched an episode of “Another Life” in which our heroes had found an alien planet. In an attempt to make the place look alien the set-makers had spray-painted a part of a woodland with blue paint… But they’d done a rush job. If you looked closely (or even just taken a cursory glance) you could see where they’d not really taken much time with the spray paint and you could see the green underneath all over the place.

I spent a few minutes of Facebook sending out birthday wishes, then rolled my eyes at one of the UK Weather Forecasting pages. The chap who runs it was ranting about how he is fed up with the negativity he is reading in people posting about his (continually crap) weather forecasts. You would think that he might compare his forecasts with what actually happens, look back at his forecasts, and then try to come up with a better way of forecasting. Demonstrably what he is doing doesn’t work.

I woke “er indoors TM”, wished her a happy birthday and set off to work. I went via the petrol station where petrol was ten pence per litre cheaper than it had been last week. I also got a sandwich which the woman on the till scanned without comment. In the past they have flatly refused to scan any shopping; presumably someone has had a word with them?

As I drove west-wards the pundits on the radio were talking about energy prices. With BP and other energy companies reporting record profits, my monthly leccie and gas bill looks to be topping three hundred quid a month before too much longer. Can't say I'm keen on that.

There was also talk about how prospective Prime Minister Liz Truss has described the leader of the Scottish National Party Nicola Sturgeon as annoying and best ignored. That bodes well for the future of the (so-called) United Kingdom, doesn't it?

I got to work to find that there was a load of free croissants going begging. Apparently a colleague lives next door to someone who runs a company which specialises in making sure that food isn't wasted, and periodically he brings in a load of bread products which are past their best. I had a couple of stale croissants with coffee. I would be so easy to kill... just put a pile of poison on the table, put a sign on it saying "free food" and I would yum it up.

With work worked we went round to visit the first fruit of my loins. Being “er indoors TM” s birthday Cheryl had boiled up a rather good bit of dinner. And with dinner scoffed I fell asleep whilst the girls did the hot tub.

I suspect the hot tub will be one of the first economies once the gas and leccie bills top three hundred quid…
Posted by Manky Badger at 10:49 pm