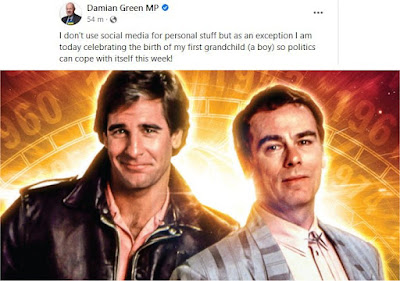 Last night’s night shift was probably one of the better ones. I think I would have preferred it if the day that was wasted before ethe night shift hadn’t been a Sunday though.

As I drove home the pundits on the radio were interviewing the Minister for something-or-other about the spiralling costs of child care. It was claimed that the average family in the UK spend about twenty per cent of their income on child care whereas in Germany that figure is one per cent. The Minister for something-or-other claimed that the reasons for this were many, and he was looking into it. It strikes me the reason for this is straightforward. Germany has (according to Wikipedia) a “liberal-left coalition government” whilst here in the UK we’ve got the Conservative party with a stonking majority.

For those of my loyal readers who feel I’m knocking the government, I’m not at all. This is a simple statement of fact. A “liberal-left coalition government” will pay for such things as childcare (by taxing the electorate) whereas a Conservative government with a stonking majority will not. That’s how the two of them operate.

Mind you the obvious question is where do the Germans get the money to pay for child care? No one on the radio asked that question. How much more tax does the average German family pay compared to the average family in the UK?

These pundits on the radio never give the full story, do they?

Once home I took the dogs out. We went to Orlestone where we had a good walk. The puppies met some Spaniel friends and bothered them (as puppies do). One of the older Spaniels was a tad grumpy and told the puppies off, which was good for them.

And with walk walked I went to bed and slept right up until someone with an utterly incomprehensible accent phoned me trying to sell me something. I *think* it might have been a new phone he was hawking; after five minutes I told him that I had absolutely no idea what he was talking about, and he would be better off bothering someone else. After I’d repeated myself three times he hung up. I think understood me as poorly as I understood him.

Presumably some people buy these things or the companies wouldn’t keep randomly phoning people… would they?

Finding myself awake (which was more than the dogs were) I made toast and had a look at the Internet and my piss boiled. I follow my local MP on Facebook… he mentioned that he’s taking the week off of politics as he’s just become a grandfather for the first time.

Having a grandchild is a wonderful thing… and so must be being able to take an extra week off work to celebrate. I didn’t take any time off work for the births of “Stormageddon – Bringer of Destruction TM”  or “Darcie Waa Waa TM” as doing so wasn’t possible. I was also back at work immediately after both fruits of my loin were born, let alone grandchildren.

I then had a little look on the government’s web sites. Parliament closes down for fifteen weeks every year so it’s not like he’s short of leave. and bearing in mind the way MPs are paid I can’t help but wonder if this week off is paid or unpaid. Though with an eighty-four-thousand pounds salary to say nothing of all the other little earners you’ve got on the go, it’s not like he can’t afford an unpaid week off work, is it?

Yet again I find myself questioning my career choices…

Oh – and the TV show “Quantum Leap” is coming back… Could be good. I’m actually rather looking forward to it, though I wonder if I will ever see it. Back in the day you turned on the telly and chose your channel. But as so many TV shows go to so many obscure channels (which all charge), watching telly is sadly becoming an expensive proposition.