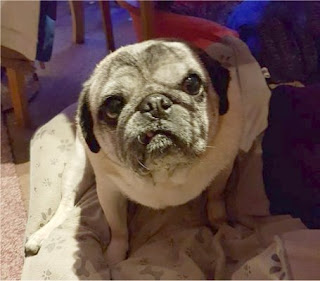 Someone was snoring for much of the night. "er indoors TM" or one of the dogs? Whoever it was, I wish they would be quiet next time.

I finally nodded off just before the alarm went off and came downstairs maybe thirty seconds too late to get Sid into the garden (bless him!)

I watched another episode of “Motherland” as I scoffed a bowl of granola, then had my morning rummage round the Internet. Facebook was on the dull side. No one was squabbling at all, which was probably for the best. Other than aliens having phoned from Alpha Centauri, pretty much nothing at all had happened overnight (and it later transpired that the aliens were a false alarm).

I sent out birthday wishes, then got myself ready for work.

Pausing only briefly for Munzee purposes I went off to find my car. It was easy to find - it was the one under all the ice. Five minutes of vigorous scraping soon got it ready to go and I set off work-wards. As I drove the pundits on the radio were talking about various countries’ attitudes toward taxation and funding of public services. Great show was made of the American tax system in which tax rates are very low compared to other countries; the idea being a very small state-run sector is a good thing. If the public want anything at all they can pay for it from private sector suppliers on an as-needed-for-profit basis. For example why should I fund schools when my children stopped going to them fifteen years ago? Or why should I pay for the hospitals which I use oh-so-rarely?

Personally I don't hold with this school of thought – Take the hospitals that I don’t use very often. When I do use them (like my nasal surgery or my dodgy hip of last year) I run up a bill of thousands which I am very glad that I don’t have to pay myself. And following on from that example... Veterinary care is provided by the private sector here in the UK and is a microcosm of the pay-as-you-need-it American healthcare system.  Fudge's iffy kidneys cost me the thick end of sixty quid a month. As it was pointed out on the radio, American health care is effectively a luxury for the rich.

With work done I came home and spent a little while on the insurance comparison websites. Bearing in mind the savings I made by consolidating mobile phone, telly and internet with Sky, and also bearing in mind I halved the cost of our house building and contents insurance I wondered if I might get a more competitive quote for Fudge.

What with his spondylosis and his chronic kidney failure, no company wanted to take him on. We shall stick with what we’ve got as we seem to have little choice.

And in closing, today is Sid’s birthday. He is ten. Of all the dogs he has been in the family the longest and is firmly at the bottom of the pecking order. He’s a lazy little thing, often going to hide when “walkies” is mentioned. He’s a greedy little thing, being first in the queue whenever there is any hint of scraps of food.