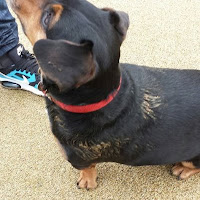 I was up early today and with brekkie scoffed I set off rather earlier than usual. I had an early start at work today, and with plans for the afternoon I needed an early start on this "geo-calendar" day. I'd staked out a geo-target not far from Hythe and not a million miles off of my (rather convoluted) route to work. I soon found the thing. From the on-line description I formed the impression that this cache was once actually a rather clever hide; but now it is broken and needing a little fixing. But a find is a find, and I am now another day closer to filling the geo-calendar. Only thirty three more days (over the next few months) to do.

As I drove on to work I listened to the radio. And got rather cross. There was consternation that some people in obscure rural communities are finding themselves isolated as the subsidies to bus services are being cut. On the one hand there is something of a problem in that people are finding themselves unable to travel as there are no bus services. On the other hand my taxes are paying for buses for people with better houses than I have and who live in far prettier areas than I do.
The answer is obvious.If you choose to live in the arse end of nowhere you need a car. And if people who live out in the sticks can't drive then they could sell their houses and move closer to civilisation (whilst making quite a profit whilst doing so).
There was also major concerns about the Shell oil company. Their profits are seriously down. Last year they only made ten billion pounds in profit. *Only*! Because of this they have made ten thousand people redundant.

I got to work, and pootled about until mid day when I left. With a "use it or lose it" policy for annual leave I'd booked the afternoon off.
As I drove home I stopped off at the village shop in Chilham. I drive past this place every day and thought I might pop in to get a sandwich. So I did. I won't do so again. They had som very good stuff... but it wasn't cheap. And the service left a *lot* to be desired. I won't be going back again. I can get simular stuff without the attitude down the road at Perry Court.

Once home I got the lead onto "Furry Face TM" and we went off to meet "Daddies Little Angel TM" and "Stormageddon - Bringer of Destruction TM" . My dog barked at every push chair he saw until he spied them in the distance. He soon shushed his woofing.
We had a rather good walk down to Brittania Land and found a new bridleway that wasn't there a few months ago. But now we know it is there we shall certanly use it again. Especially as it leads to the Queen's Head.
We had a crafty half and then popped over the road to get some information for a geo puzzle. We then made our way home though Park Farm and WIllesborough Dykes. And when we were within ten minutes of home "Furry Face TM" smeared himself from nose to tail in fox poo.

"Daddies Little Angel TM" and "Stormageddon - Bringer of Destruction TM" set off home. I set off home in the opposite direction, and on arrival spent rather a long time scrubbing my dog.
With dog scrubbed I then loaded up and charged the technology for tomorrow's geo-mission and then spent a couple of hours struggling with web cam apps on my phone in preparation for the geo-web-cam at Abbey Road.

I had planned to have an early night this evening...