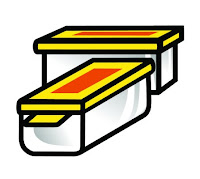 I didn't sleep well, seeing pretty much every hour of the night. I finally got some decent sleep only to be plagued by nightmares about the difficulty of finding a child's garden slide in a post-apocalyptic disaster when the alarm went.
I got up and over brekkie checked my emails. I had one from the nice people at Coursera congratulating me on getting to the end of the first week of my course. I've actually done up to week three of the course material. You would think they might pay attention.

And then I set off (on my own) at 6am. I've been working on a particular geo-challenge for some time. It involves finding different numbers of different sorts of geocaches in a single day. I qualified for this challenge in all respects but one, so today I thought I'd rectify that.
I was lacking in not having found (at least) twenty one multi-caches in one day so today was to be a multi-day.

For those of my loyal readers who have better things to do with their lives than scrubbling in the undergrowth looking for plastic pots whilst raising the suspicions of the normal people, a multi-cache is effectively a puzzle you solve when you are out and about. The GPS unit takes to you a physical object such as a church notice board, a war memorial, a gravestone, commercial business... it could be anything. But once there there is a puzzle to solve involving what you see at that location. You get instructions of how to convert what you've found into a set of GPS co-ordinates. You then program your GPS unit and go for a short walk (about a couple of hundred yards from your initial target) to find the actual geocache.
Doing a multi is a bit of fun. That is.. doing *one* multi is a bit of fun. Doing two is something of a faff. Doing three is into the realms of seriously farting about. And very few hunters of tupperware would bother with a forth. I know several geocachers who ignore every multi they encounter because they are too much mucking about. Deliberately going out for twenty-one would be considered incredibly daft (and when hunting tupperware, standards of daftness are rather high)

But I wanted to get this challenge. Bearing in mind that not many people would want to go for multis, together with the fact that the route I had planned involved a *lot* of walking about, and I didn't really know the area, I went on my own. I arrived in Bexleyheath just as dawn broke and I had a little wander about. In two hours I got six of my seven geo-targets.
The next phase of my plan originally involved a lot of driving to and fro. But on discovering that pretty much everywhere in Welling was resident-only parking I managed to find somewhere to park and left the car and went on a five mile stomp. I found the seventh of my eight targets on this stretch at mid-day, and pausing only briefly to find a pub called "Fanny on the Hill" I ended up a mile and a half away from the car. Woops.

I then relocated to Belvedere and walked from another three or four miles; all the time sniggering about the place's name. Hugh Dennis once did a rather amusing sketch involving a fictitious child called " Belvedere". With nine geo-targets on this stretch I got the lot. I endded up with a total of twenty-two. I only needed twenty-one. Mind you I again ended up over a mile away from the car.
I had located a fourth target zone which wold come into play if I'd not been able to find enough but I didn't need to go there. I was pleased about that. I'd found my first multi at 7.36am this morning and I got back to the car for the last time at 3pm. You can get too much of a good thing.

I came home and took "Furry Face TM" for a walk. I had thought about taking him with me today, but I decided against it. I needed to be jotting and scribbling notes as I went; taking him would have slowed an already tedious adventure.
We went round the park where we saw a couple of young ladies who seemed to be in love. With each other. We then met a small child who told me my dog looked just like her friend Lacey's dog. I explained that I was Lacey's grandad, but I don't think she believed me.
And then I nearly got run over by a cyclist who doesn't understand the concept of "roads and pavements". What with these excitements added to a day's walking here there and thither I was glad to get home.

After a rather good scoff we weent round to Chippy's. A little chat, and then I slept through an episode of "The Flash".. I could do with a rest.