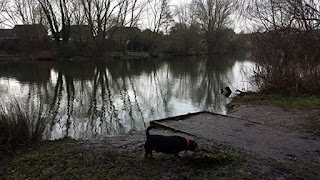 I slept well but woke with something of a back ache. I've been feeling rather physically rough for a couple of days now; perhaps I overdid the walk on Tuesday.
As I scoffed my brekkie I had a look-see on-line. Despite an incredibly slow connection I saw that Tony Blackburn (the famous disc jockey) has been sacked by the BBC following allegations of child molestation centred on an incident which supposedly happened in 1971. Mr Blackburn has denied the allegations and (from what I can glean from the news stories) there isn't any actual evidence against him. But even *if* he is as guilty as hell, why has it taken forty five years for these allegations to be made? Innocent? Guilty? How can there be a fair hearing from this distance in time?

The washing machine finished doing its thing so I put the wet stuff to dry (by the radiator) and took "Furry Face TM" for a walk. It was a cold morning; the weather forecast had been for sunny intervals. We had rain, hail and snow alternating at regular intervals.
As we walked I lost count of the amount opf people on bicycles who nearly ran us down. I was always under the impression that bikes should not be on the pavements.

As we walked we met a small dog that looked vaguely like my pup. The nice lady with the dog remarked on the simularity and asked how old Fudge was. When I told her she said her dog was a puppy and she hoped he wouldn't grow up huge like some dogs do. To illustrate her concern she pointed at a passing Alsation. I asked her if her dog was a Jack Russell. She said that was what she'd been told. After a little confusion it turned out she had no idea about breeds of dogs. She seemeed to think that all dogs grew to random sizes.

Just as I got home I received a text message saying that the fibre-optic broadband was live. So I plugged in the new router only to find it didn't work. I phoned the Internet company who told me it would go live at some point today. I pointed out to them (several times) that I had received a text saying it was live *now* and each time they ignored what I was saying. Eventually I got them to test the line and (sure enough) it wasn't ready yet.

I went out to the back garden and mowed the lawn. In years gone by garden work never started before Easter. Realistically I could have been mowing the lawn all winter long this year. It didn't take that long to do. Mind you I didn't really do a thorough job; just a scalping. I then scraped up the cuttings.
My plan was then to cleen out the fish pond filter but when I opened it it was pristine. I must have already done that job. So with a little time I made a start at cutting back the clematis which overhangs from our troublesome neighbour's garden.
The last time I spoke with this chap he was trying to enlist my help in getting a tree cut down. There is a tree in a garden several doors down the road. Apparently it blocks his light and some of the leaves from it fall on his lawn. As he told me about this he was becoming visibly angrier and angrier about the matter. His face was getting very red and the veins on his head were standing out. A few leaves from one tree thirty yards away is a *serious* issue to him. But he doesn't see anything wrong with having his clematis and roses and vines all down the garden fence overflowing into my garden by three feet.
I didn't like to touch his clematis, but it had become so bad that I couldn't actually get to my pond.
This bloke is something of a worry. I wouldn't say that he is clinically insane but he scares me. I would also say that when he finally does run amok and appears in the local papers and everyone appears shocked, bear in mind that I formally warned the police about him over over ten years ago.

With three dustbins full of garden rubbish I then drove up to the tip to get rid of it all. I treated myself to KFC for lunch, then watched a film I'd recorded. "This is 40" was something of a disappointment but it gave me something to watch whilst I did the ironing.
With ironing done (three hours later) I sparked up the lap-top again to see if the fibre-optic broadband was live. It was. Mind you for all that the speed test says it is running over twice the speed at which it used to run it isn't actually any noticeably faster.

Fish and chips for dinner, and then I fell asleep during "Benidorm"...