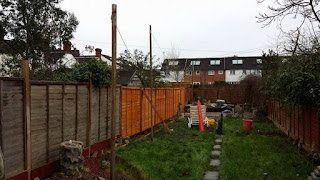 A rather good night's sleep. For some reason "Furry Face TM" didn't spend the night on the bed; instead he laid in the hallway all night long guarding the front door. Something there has been bothering him. "er indoors TM" thinks it was a spider.

Over brekkie I had a look-see on-line. Yesterday one hundred and forty seven people wished me a happy birthday via Facebook. One hundred and forty seven!! I was rather impressed with that total. Going through the list were work colleagues, ex-work colleagues, friends I see all the time, friends I see rarely, friends I've not seen for years, old pals from kiting days, old pals from snake-herding days... so many people; so many memories.

I had a text message; on Friday I'd ordered the ingredients for building our new fence and arranged to have them delivered today. The nice delivery man was on his way. And just as he dropped off all the bits so "My Boy TM" arrived to help. Bearing in mind it was pouring hard this morning I wasn't really keen to do the fencing today, so I suggested we popped round to B&Q to get the brackets to fix the fence panels to the posts. As it was on the way we also stopped off at The Works cafe for a bit of second brekkie.
"My Boy TM" was keen to crack on with the fence as the rain wasn't *that* heavy. (or so he said)
So.... we removed four old fence panels. They took some moving. There was something of a major disaster as we found another of the fence posts had snapped at its base. Replacing this one would involve moving next door's shed so after a bit of thought we decided to bodge it and buttress it with an old scaffold board. We struggled a little in putting a new post into the hole that we'd dug out last week, but we got it so it seemed to be OK; as I said at the time if it collapses again we'll just do it again properly.
The first fruit of my loin is convinced the fence isn't completely straight. He's probably right, but I told him that only dull and unimaginative people don't have a fence which carries an aura of rustic charm.

Three hours concerted effort had six new fence panels in place. But the rain hadn't let up and by the early afternoon we were soaked to the skin. There are still two more panels to replace, but those are ones which might need a little digging out and landscaping. We'd made enough of a swamp of the garden already, we didn't fancy stirring mud any more so we've decided to do that next Tuesday.

I drove "My Boy TM" home, then took "Furry Face TM" for a walk. He gets fractious if not walked. As we went round the park we met a gaggle of schoolgirls under the supervision of a rather harried looking teacher. One of the schoolgirls asked me if she could take a photograph of my dog for her homework. As we got "Furry Face TM" into a pose this schoolgirl happily told me her homework was all about hazards.
I've never really considered Patagonian Tripe-Hounds to be hazardous. One lives and learns.

With a little time on my hands I did more of my current Coursera course. Particle physics has nver been my strong suit; and theoretical stuff about dark matter and anti-matter is quite heavy stuff. But it was rather interesting. And there were two tests as well. I got seventy-five per cent in one and sixty six per cent in the other. I may well have done better had I not fallen asleep.

"er indoors TM" came home from work, boiled up a rather good bit of scoff then went off bowling. I spent the evening slobbing with my dog in front of the telly. Alan Partridge, Ronnie Corbett, a documentary about sailors, and Gotham's on later...