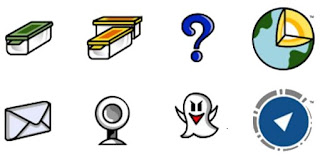 I didn't sleep as well as I might. I was expecting a phone call from "Daddies Little Angel TM". Her staffie Buster is not well. He's not moved since he got rather over-excited on his walk yesterday. I was half expecting to be driving his remains to a dog cemetary this morning. but it turns out he's probably just pulled a muscle or something. After all he's a big dog and he'd a bit old to be chasing round like a puppy.
This is probably not unlike what "Furry Face TM" did a couple of years ago. Very nasty at the time but nothing that enforced rest didn't resolve.

I scoffed some toast for brekkie and had a look-see on-line. Little had happened overnight. So I popped the lead onto "Furry Face TM" and we went for our morning walk. Today we had a little drive to get to our walk. Having finally qualified for a geo-puzzle last Tuesday we went out to collect it today. And having a little dog who needed a walk we made a little adventure out of it.
I'd looked at the suggested parking spots on Google street view and (in all honesty) didn't like the look of either. So I parked up at the nearest church and we waalked down through the woods and fields finding not only the target geo-puzzle but three others as well. As we walked there were horses and wookpeckers doing their thing. "Furry Face TM" had a near-miss episode with a pheasant and a very near-miss episode with a pile of fox poo.

I made a bit of a hash of getting home; having spent far too long in a seemingly endless maze of country lanes I eventually found myself gong the wrong way up the M20. But we got home, and over a quick sandwich I watched this week's episode of "Killjoys". The show is quite good, but doesn't seem to be going anywhere.
I then uploaded some photos I'd taken on our morning's walk. They went up very quickly on the new fibre-optic wotsit.

The phone rang. a heavily accented voice told me that he had good news if I could answer one simple question: his question was unintelligible. I asked him to repeat it four times. I *think* his question was "what was the best washing machine that you is preferring now?" I asked him what that meant, but he couldn't ask his question in any other way. I suggested he might like to phone back once he had got his script translated into English and hung up on him.

I had a plan to spend the afternoon in the garden trimming back the overgrowth that I was whinging about yesterday. But I ached a bit, it was cold outside, and I couldn't be bothered. Instead I spent the afternoon working on week four of my Coursera course. The first lecture was on the expansion of the early universe; I got full marks in the test for that, the second was on the future of the universe; I got sixty six per cent for that.
Overall I pased the course with a mark of eighty two per cent. Not too shabby.

I thenn drove round to McDonalds where I met up with "er indoors TM", Jimbo and Stevey and we had a rather good McScoff prior to astro club. I had a rather good evening there; much better than I have had over the last few months. There are still those who refuse to speak to me, but on closer observation they don't seem to speak to anyone other than a select few.
I'm probably just being a little over-sensitive...