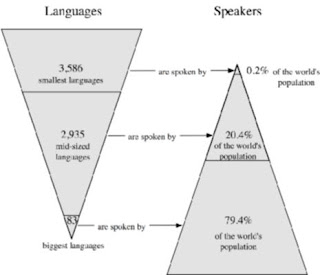 I’ve had a smashing week off work – a Tudor-themed hog roast birthday party, a trip to a reptile zoo, three separate fishing sessions and four days away with some of the best people you’ll ever meet. So going back to work this morning was hard.

There was an interesting article on the radio about languages. I’ve blogged on the subject of languages before, and received some spectacular hate-mail on the subject. So let’s try again. The article on the radio was telling us of the imminent demise of a language native to . A derivative of the French language; it has an estimated hundred or so speakers still alive, and most of those are elderly. Another channel island () has its own version of a language, spoken by some fifteen people. The article then went on to say that 96% of the world’s population speak only 4% of the world’s languages, and they made the observation that all the children of the world of every creed, colour, shape, size and religion listen to pop songs sung in American English.

I’ve often thought the world would be a better place if we all spoke the same language. A thought which occurred to me several times today as the news kept repeating comments from the Pakistan cricket team’s coach. I’m sure the chap is a sterling fellow, but I did keep giggling – I can’t take comments from someone named “Whacker Eunice” seriously.

I then received a text - “Daddies Little Angel TM ” and the “Rear Admiral” were going fishing. Did I want to join them after work? I arrfived at the pond shortly after 6pm, and we had a pleasant hour in the sunshine. We caught two fish between us in that time, but then it’s not always about catching fish.