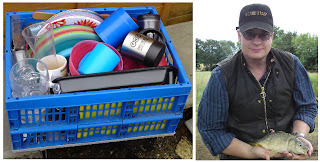 Yesterday I mentioned how disorganised we are at Bat-Camp compared to how slick we are when setting up for kite festivals. Despite having delivered a car full of stuff to the farm yesterday, this morning the car was overflowing with yet more stuff to go to the farm. Martin and “Daddies Little Angel TM ” arrived at 9am with more luggage (and guinea pigs) and by the time we’d been to Asda for the makings of lunch there was hardly any space in the car at all. And we still had to fit Tony and his gear in. When we arrived to get Tony I was expecting to tell him there was no room at the inn, and he’d have to walk. But totally out of the blue a wasp appeared from nowhere and stung me in the neck. Tony applied Savlon, and so we made space for him (somehow).

We arrived at the farm (with a throbbing neck) and having excavated the passengers out from underneath all the luggage, we loaded a tractor trailer with said luggage and made our way to camp. We got the guinea pigs into their hme for the weekend and then a few minutes were spent fiddling about laying out sleeping bags, finding jim-jams and torches and sundry boring but necessary tasks. It’s so easy not to do these jobs but do “fun” instead, and then find yourself trying to find a sleeping bag whilst rather drunk and in pitch blackness at 1am. (Been there, done that!). Having set up “Green and Smelly” (the toilet) we washed our hands at the tap (running water at camp – how posh!), and settled down for lunch.

I looked around: “where’s the plates?” A quick search revealed they weren’t on the camp site. A quick trip to the farm house revealed they weren’t on the farm at all. And then I remembered looking at the box of plates and cups in our shed and thinking that I needed to pack it. So I drove home quickly to get it whilst dinner was got ready. Whilst shopping yesterday Batty had described what he wanted to do for our mid day scoff, and I must admit I don’t think I was paying much attention at the time. But it was great – Halloumi is a kind of cheese, and when it’s fried it goes really well in a sandwich with bacon and tomatoes. And even better when you’ve a plate to eat it off (!)

And then to the pond for a couple of hours fishing before and Irene arrived. Or that was the plan. With no fixed arrival time, I had this vague idea that they would phone on arrival, and then we’d come down with the tractor to load up their kit. And in the meantime we’d do fishing whilst waiting. We cast out, and started getting tiddlers. The father and daughter competition got quite intense, and a good time was had by all; especially when the Bat caught a whopper that didn’t get away. But all the time I was rather conscious that my phone hadn’t rung, and that time was getting on. We came back to camp to find and Irene had arrived to find the camp all set up, but no one home. With no phone signal and no idea where anyone was they decided to make a start on cooking tea. An idea which was heartily supported by all.

With the arrival of ‘er indoors TM , the “Rear Admiral” and the landlord, dinner was served: a truly wonderful curry. Eleven of us had a treat. I was very happy to do the washing up after a bit of tea that good. And then we sat around chatting and drinking too much till too late….