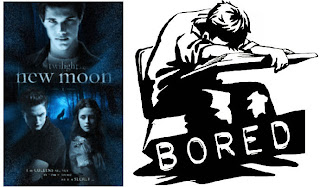 Back to work, after a few days off. It wasn’t my idea to go back, and (quite frankly) I didn’t want to. There was a time a few years ago when I loved my job; now it pays the bills until I retire. Which is a great shame.

After work we watched the second film in the “Twilight” series - “New Moon”. At first thought I wasn’t overly impressed, but on reflection I love the film. I now have a cure for my chronic insomnia.

And I’ll end today’s entry with a bit of a whinge. I’m planning to get my bike out and have a cycle ride this coming Saturday. Starting from my house at 11 a.m. (ish) I (and anyone who wants to come along with me) intend to cycle along the river where I might just possibly see pike and trout. Along by the rugby club there are usually greenfinches, which are a bird you rarely see. And then we’ll pick up National Cycle Path 18. Whilst it’s nominally a road, I’ve hardly ever seen any cars use the thing. We’ll go along here, through some wonderful scenery and after a really good fun downhill whizz, we’ll find the Honest Miller. This is a pub in a nearby village which has a cracking ale selection, a really friendly landlord, and the best food you ever did scoff. From here, once suitably replete, we will cycle up into Wye for a pint of afters, before taking National Cycle Path 18 home again; to be back home for mid afternoon.

I’ve mentioned this idea to a few people. Some are up for it. Some would like to come, but cannot because they are working. And there are a few who have dismissed the idea entirely because they would rather spend the day “chilling”. “Chilling” – I detest that phrase. Just hearing it makes my blood boil. What does it mean? Someone intends to refrigerate something? I have done “chilling” before, under expert supervision; I was fed up with it within fifteen minutes. From what I can see, “chilling” involves sitting about, deliberately wasting the few precious years we have left in a deliberate attempt to do nothing. Boredom comes often enough in life – why go actively seeking it out?