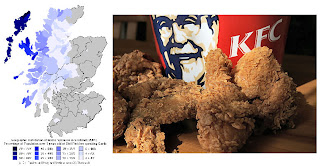 I see the Scottish M.E.P.s have scored a victory. They now have the right to use Gaelic as an official language in the European parliament. This is good for those M.E.P.s whose first language is Gaelic. Which is none of them. Why on Earth did they go to the bother? How many people speak Gaelic as their first language anyway? In the twenty first century shouldn’t we be looking to a unified world, rather than enhancing the divisions caused by language?

Another late start meant another morning wasted in NeverWinter before heading in to work half an hour early. Just as well I was early; a surprise meeting was sprung on me. Getting in half an hour early meant that by mid afternoon I was only running an hour late. I’ve another meeting tomorrow. I’ve heard (third-hand) that I’m in line to take the blame for somebody else’s stuff-up. We shall see.

And then home to find that ‘er indoors TM had gone out flogging candles without leaving me any tea. I sent “Daddies Little Angel TM ” up the road to get some diet KFC. Diet KFC is substantially like normal KFC, just you have a bit less of it. I had diet chips too….

In the meantime, here’s some light reading. Pay close attention – I shall be asking questions…