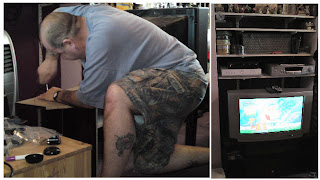 I wasn’t on top form this morning – can’t imagine why I might be feeling under the weather. So you can imagine my reaction when “Daddies Little Angel TM ” was ringing the doorbell at 8am, having locked herself out. I got back to bed, and waited for the church bell to start. It didn’t, but then I heard the front door opening, and “coo-eee!!” echoed up the stairs. Nathan was visiting. Then the phone rang. Had we received an email from the arky-ologee club? No. Had we forwarded it to the other club members? Obviously not. Why not…? Then “Norman Stanley” rang. Things aren’t as peachy as they might be in HMP Slade..

Whilst preparing myself a spot of brekky, I found some tea bags in the sugar bowl. I’m told that keeping the two in the same container saves time in the mornings. And then to Facebook whilst scoffing said brekky. Yesterday in I spent all day lugging around a rucksack full of bottles of beer that I never drank. And I thought it was a shame that I never met up with Andrew and Sandra. Sandra has put up a photo of me from last night drinking a bottle of that beer. It’s amazing what you miss when you’re not paying attention.

The plan for today was to go to Chip’s house to collect his old telly, but he phoned and said he’d bring it round. I’ve been getting a tad fed up with our old non-widescreen telly. It’s surprising how much of the action of a TV show is happening off the edge of our screen. Chip was getting a new telly, and said we could have his old one. There was a minor hiccup – the stand it came with was four inches too big to fit into the space we had. And so to to collect a TV stand. I had this idea that we could be to , back and have the tellys swapped over in an hour. I forgot about the fun that is flat-packed furniture. Mind you, over the years the quality of flat packed furniture instructions has improved. I got the new stand together in less than two hours. And then I turned the telly on. It didn’t work. So I re-tuned it. Nothing. Not a sausage. So I wondered if I had the right scart lead plugged in – I had half a dozen to choose from.

It was at this point that I got the red mist, and stripped all the shelves off. We have so much rubbish in the living room. Over the years, if a scart lead has been a bit iffy, we’ve just got a new one and left the old one in place. I dinged out half a dozen assorted leads from behind the Sky box, to say nothing of a VHS deck, amplifier, tape deck and CD player that aren’t connected to anything. They can go into the attic for later. With the spaghetti of cables simplified to those that were actually doing something, the TV started working. The “on” switch is being somewhat problematical (in that it don’t work), but judicious fiddling with the program button does the trick.

And now it’s Sunday evening. Time to write to the chokey again.