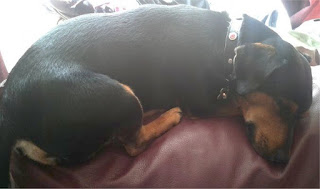 With Fudge gone back to the Fudgery the house seemed very lonely this morning. No one was waiting eagerly to greet me when I got up this morning. No one dozed next to me whilst I scoffed brekkie. I came home to an empty house this evening. I miss him.
I had been expecting a week of chaos and mayhem last week whilst he stayed with us, and in retrospect that never happened. He was rather excited on his first evening, chewing a dustbin and nibbling a carpet, but as time went on, so he calmed down somewhat. He did love destroying plastic pop bottles in the garden, and there was a dodgy two minutes with a sturgeon. He doesn't really get on with other dogs that well, but that's nothing that cutting his goolies off wouldn't cure. By and large he was no trouble. Perhaps taking him for a lot of walks wore him out - I'm told that he looks like he's lost weight over the week. He was a good dog; not scrounging at meal times like so many dogs would. I didn't like leaving him home alone when we went to work, but a lot of dogs are left home alone. And on coming back home to him, invariably we would find he was asleep anyway. And he had no "little accidents" at all.

Now I've had a dog for a week, the burning question must be "do I want a dog of my own". And for all that I liked having a dog for a week, the answer must be a resounding "no".
Take Sunday morning for example. We had planned to go out for a spot of breakfast. Where would we go? Normally we'd be spoiled for choice. With a dog in tow, the options become severely limited. Also having a dog in the house can put people off of visiting. Not everyone likes dogs; there's quite enough badly behaved ones out there to keep fuelling the prejudices of those who aren't keen on pups. Forcing the issue by employing the philosophy of "love me; love my dog" all too often means that rather than your dog gaining pals, you end up losing friends. Dogs aren't cheap to obtain or to maintain. They generate a prodigious amount of poop. They need lots of time. And actually taking a dog on a decent walk can be tricky; I lost count of the amount of fences and stiles I had to carry Fudge over last week. And I lost count of the amount of piles of dung in which he tried to roll. Taking a dog into the pub garden during a walk is off-putting for many people; so many pubs have "no dogs" policies for that reason. And I get too attached to animals; I'm currently pining for a dog I see every week anyway... I liked having the loan of a dog. But I don't think I want one permanently. Having said that, if anyone wants to re-home a dachshund I might (just possibly) be interested.

Meanwhile my piss (that most volatile of fluids) boiled. Today's news featured the shocking revelation that if one wants to buy chips at the Olympics, one must buy McDonalds chips. Unless one has fish with one's chips. And that's only because McDonalds don't sell McFish (yet!). If you fancy a crafty half with your McChips, you can have a Heineken (or go thirsty). And if you want to buy your McChips with a credit card, then it must be a Visa card. There's been quite a furore about the matter. I've had this discussion in several places over the last day or so. I only consider this revelation to be shocking because so many people don't seem to understand the entire concept of corporate sponsorship. If McDonalds and Heineken and Visa are paying for the Olympic games (which they clearly are) then they want a return from their investment. They've paid to be the sole supplier of their particular product. Of course they don't want KFC and Burger King and Fosters and MasterCard muscling in on the act. If other suppliers want to sell their wares, then tough (!) They had their chances to throw millions of pounds at the Olympics.

If, however, we want a choice when buying stuff at the Olympics, then the entire event should have been funded somewhat differently (or properly, depending on your political leanings). The whole concept of corporately funding the 2012 games was something which was mooted and decided years ago. It's a bit late to be kicking up a fuss now...