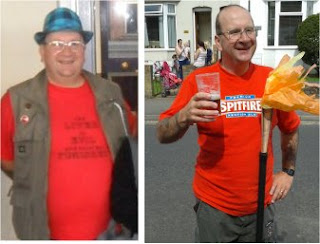 Yesterday was a really good day - a once in a lifetime special event of which I made the most. A once-in-a-lifetime chance to see the Olympic flame come past my house, and then a rare dry day and a barby in the garden with twenty-odd friends who came and went throughout the afternoon. I even got the washing machine fixed into the deal.
Coming back to reality today was dull. Not that today was in any way a bad day; just that it was dull. Regular readers of this drivel will know that there's quite a bit in my life that is out of the ordinary and eventful, and compared with those days, the average days can seem oh-so-dull.

A comment was made about one of the photos of yesterday's extravaganza; specifically about how thin I looked. Today's piccie compares that photo of yesterday with one from exactly a year ago. In that year I've lost (nearly) five stone in weight: that's sixty-six pounds or thirty kilograms (to anyone of a metric disposition). My clothes no longer fit, but I'm told I must feel better. In all honestly I can't say that I notice any difference. Mind you, I like being thinner: I never liked being the fat lad. No one ever intends to be the fat lad. It's something that just happens.

And now I'm not so lardy, my giblets might be of use to others after I've croaked. Today I signed up with the national organ donor register I didn't realise that the old donor cars that I used to carry don't count any more; if you want your bits to be used, you need to sign up. So I have. I wonder if they could do with the "large glandular organ in my abdomen"?

As I drove home there was an especially dull article on the radio about the LIBOR - the rate of interest banks charge each other. there's been a scandal about it apparently, but I can't really figure out what the scandal is. Which is entirely the problem with high finance. I can remember (many years ago) a friend who'd recently taken up a job with one of the big high street banks. He was quite pleased that he could take out a loan from the bank at an interest rate which was substantially less than the inflation rate; effectively getting something for nothing. It was a perk of the job, and no one quibbled. Perhaps if people had quibbled about that sort of thing thirty years ago we wouldn't be in such a state now...?