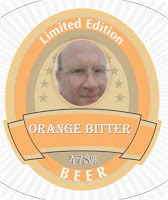 I think I am fated not to get a good night's sleep. Following on from noisy parked cars and phones going flat, this morning the bin men were going for it at full blare. I gave up trying to sleep, and once the washing was on the line I went up to town. As I arrived I suspected the worst - there was a particularly vociferous harridan shrieking about "it's a circus". But I never saw any clowns or animals or anything remotely circoid.
I popped into Wilkos to get the makings of my next load of cheap beer. It looked to me like they hadn't re-stocked for a while. I do hope they aren't getting out of the home-brew market. They are twelve quid cheaper than the home-brew shop.
As I came home I saw the mobile phone shop was doing my new phone for a fiver cheaper per month than what I was paying. I wasn't keen on that idea, so I went in to whinge. It turned out that they were doing the cheaper deal on a much cheaper package; so I wasn't too miffed.

Home; where I put the word out about Sunday's psychic fair (where I will be flogging paintings), and I applied for a few jobs. An agency phoned me about another possible opening. Here's hoping. And then I put a pan of water on to get my home brew going and I played "Bubble Witch Saga" for ten minutes. I went to check on my beer only to find I'd turned on the wrong hotplate. So I put things right, wandered off for another ten minutes and came back to find that I'd again turned on a different wrong hotplate. Oh how I laughed.

Eventually I got the beer sorted. I've thrown an orange in with it: I liked the orange in the beer I had last weekend. I'm hoping that this will turn out well. Time will tell. It usually does. I then spent the rest of the afternoon alternating between silly computer games and dozing. A waste of a day, really...
Posted by Manky Badger at 9:26 pm