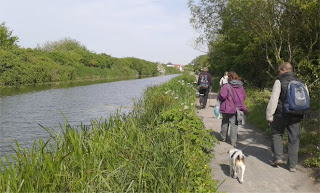 We were up before the lark, breakfasted and out of the house before 7am this morning. Troops rallied and on to the motorway before 7.15am too. We were on a mission to Essex. I've been going somewhat excessively at this geocaching lark this last week in an attempt to complete the three hundred finds in one calendar month challenge. And if anyone seriously wants to achieve this, then a relatively (!) easy way to do so is to go for a walk in Essex. The Chelmer and Blackwater Navigation Series is a series of 112 geocaches laid out along seventeen miles of the The Chelmer and Blackwater Navigation canal.

There is the minor problem that the walk is in a straight line and you end up seventeen miles from your car, but that is merely a piddling detail. The obvious fix is to find like-minded friends and take two cars, meeting up at one end, leaving one car there and then all driving to the other and walking back to where you started. And that's what we did. We arrived in Chemlsford shortly before 9am and found a cache whilst waiting for our partners in crime, then left our car behind and set off to the other end of the canal. We started our canal walk just before 9.30am, and finished just before 8pm. It was a glorious day to be out; following a canal meant that the going was very flat. The dogs were very well behaved; it had been suggested that the distance would be too far for the dogs. I seriously considered leaving Fudge behind, but I knew it would be a long day and that he would rather be with us than left at home. I watched him closely - if he showed any signs of flagging I was going to carry him, but he did better than I did.

Most of the caches were easy finds; as we walked we picked up a few extra ones along the way, including one in a multi storey car park.
As well as going for three hundred caches in a month there was another milestone I might hit. If we found one hundred and twenty three caches today that would take my total found up to two thousand caches. We ended the day on one hundred and twenty one caches; the last one of the day being the "300 caches in one month" challenge cache.

We'd left home shortly before 7am; we got home just after 10pm. I was rather tired, but came home with something of a sense of achievement. Today was my most caches in a day, longest cache walk (in distance and in time) and I found my furthest north cache.
I need a rest now.
As always, there are photos of the day's outing on-line