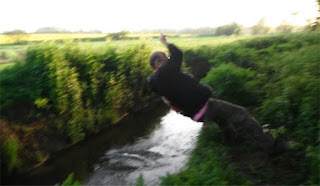 By the time we got home last night and had some tea we had rather a late night. I slept well, and over a leisurely brekkie I got a message from the Hose Beast. He was at a loose and and if I was free did I fancy going for a walk with him around the Hawkinge area. My plans for the day were rather fluid, so I scoffed brekkie, got Fudge's lead on him and we set off for Folkestone. We were only ten minutes later than I expected; having set my own mental sat-nav for the Admiralty rather than the Hoseyarium. I realised this as I drove past the motorway junction at which I should have turned off. Woops.

But we soon met up with Jose and not long after that we were in Reinden Wood. Being a wood I didn't let Furry Face off of his lead. He doesn't run away so much as he doesn't come back. But we had a good stroll, and found a few geocaches on our way. And after the wood was walked we went looking for one or two other local caches. They were all good caches; they were for the most part rather imaginative hides. One in particular warranted special mention. There was one cache in Mackie Lane. From the clue we knew it was randomly in a hedge somewhere. Our sat-nav couldn't narrow down to more accurately than ten metres. We were on the point of giving up when I just shoved my hand deep into a bush and there it was. A total triumph of pot luck. To celebrate we had a crafty pint of shandy in the nearest pub - "The Cat and Custard Pot".

And so home to find that another geocache had gone live minutes after I'd left home this morning and had only just been found. Had I not gone out with Jose I would have been First to Find. Several people commented on the fact today and asked me if I felt at all miffed. In all honesty I don't. I had a really good morning out in the sunshine. I can go looking for that local cache at any time.

After a quick spot of lunch I got on with the day's chores. The lawn got mowed, I finished the week's psychology lectures, I did some homework, and then with er indoors TM" hone from work we waited for the arrival of Jose before going out for an evening's caching round Charing and Hothfield. Some good caches including one on an island. The instructions did say not to use the rope swing. Telling me not to use the rope swing was akin to waving a red rag at a bull....