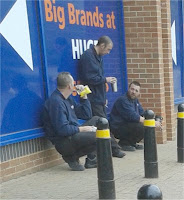 Over a spot of brekkie an email pinged up - two new geocaches had gone live locally. I say "locally" - they were in Great Chart; which is only an average dog walk away. Or, to qualify that statement, it's an average walk for me and Fudge. I'm told that some might baulk at the idea of walking that far.
But seeing how I was due to leave for work within the hour I wouldn't walk it today. I hopped into the car and off I went. The first cache I tried for was a multi-one. It was a work of genius, but I think I stuffed the sums up as the location seemed a long way off. As time was short I didn't hang about but set off to the second one. With a difficulty setting of three (rather hard) and a pile of ivy (never good) my hopes weren't high but I found it after a few minutes. First to Find; and I drove off to work feeling rather smug.

As I drove I listened to the radio. The leader of the UK Independence Party was being interviewed. And was talking patent rubbish. From what I could work out the chap was totally against the UK being in the European Union, but entirely against Scottish independence. How does that work? How is Scotland being free of the UK any different in priciple from the UK being free of Europe?

Being on a late start I popped into the Cheapo Bargains shop. I pulled up outside to find three unshaven thugs in Cheapo Bargains uniforms smoking cigarettes on the doorstep. I soon realised they were shouting at me so I got out of the car to see what they wanted. They were very vociferous about the fact that the shop wasn't yet open. So I smiled politely, but they weren't happy. They insisted that I told them what the time was, and added the proviso that it wasn't nine o'clock yet. I checked the time - it was 8:57am. They were very pleased about that, and crowed that the shop wasn't open until 9am in a rather confrontational way. Just as their manager was coming out to see what all the commotion was about I politely asked them if I might be allowed to wait the two and a half minutes, or should I go over the road to Morrisons.
With the door having been opened by the manager I went in and left them to their richly deserved arse-kicking.

Mind you, I do like the Cheapo Bargains shop. As well as the entertainment provided by the lowlife, they have some bargains. I got five curlywurlies for a quid. Perhaps that's why my weight loss has stopped?
However not everything is as cheapo as you might think. One hundred and fifty of their dog-dung bags cost eighty nine pence. Exactly the same as two hundred and fifty of their nappy sacks. And double the price of three hundred nappy sacks in Asda. It pays to shop around.

And then on to work. As it was now (demonstrably) after 9am the news show had finished on the radio. They were now playing "Desert Island Discs" in which some celebrity was choosing his eight favourite records. In my humble (!) opinion he'd chosen some right old rubbish. But it made me think. What eight records would I choose if I were on that show. I don't know. I spent a little while today pondering, but came to no real decision.

And so home. er indoors TM" was out bit I found a bag of parsnip crisps on the table. They'll do...
Posted by Manky Badger at 11:33 pm