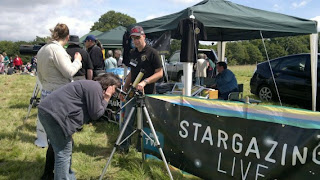 I had the weekly weigh-in. I say "weekly" - this week I've weighed myself every day. No more weight has come off. My weight seems to have stabilised somewhere between fourteen stone and fourteen stone two pounds. I suspect the key to further weight loss is to do more exercise. Not keen on that idea(!)

I got my bits and pieces together; Steve and Sarah arrived and we set off to Shadoxhurst. The astro club had been asked to run a stall at their fete and dog show. I'd gone along to help and had taken the "Badger-Original-Landscapes" stall; the idea being to raise a little cash and to sponsor the stall.
We arrived, found our pitch and set up. As luck would have it an old friend from my scouting days was setting up his photographic stall next to us. Jason soon arrived, and before long our stall was ready; as was the cake stall. We had a cuppa and a cake, and started up. The wind was against us for most of the day, but the sun didn't hide behind too many clouds. Doing an astronomy demonstration during the daytime has us rather dependent on the solar scope; after all there's only one star you can see in daylight. Mind you I did get rather fed up of explaining that last sentence during the day. "One star - what is that then?" "The Sun" "I thought you said star?" "The Sun *is* a star(!)" "No it's not - it's the Sun". Oh dear - I suppose that being rather interested in things astronomical one tends to forget that the general public know diddly-squat about space things.

Before long more club members arrived, and the telescopes were doing a roaring trade. It was a lovely day to be out in the sunshine. We sampled the wares of the home made ice cream stall, saw the hawk and the llama, and even looked at the beer tent. In years gone by I would have probably based myself there. Not any more.

All too soon the afternoon was over and it was time to pack up. As a club we'd had a successful day - a lot of interested people. A lot of people who didn't know about the club who now do. From a personal and mercenary point of view the day wasn't a success - I had hoped to sponsor the stall from the profits of the sales of paintings. I didn't sell anything. But then I had been watching the other stalls. Cakes and ice creams had been selling, but the photographs hadn't, not had the bicycle parts or the home made cushions. And the dog accessories stall hadn't really done a roaring trade either.

Home, and then round to the Fudgery for tea. We had a couple of beers, a smashing bit of tea, and spent the evening watching films and chatting and dozing before staggering home shortly after midnight. A really good evening - must do it again...